Sarugaku-cho, a neighborhood by the Atomic Bomb Dome 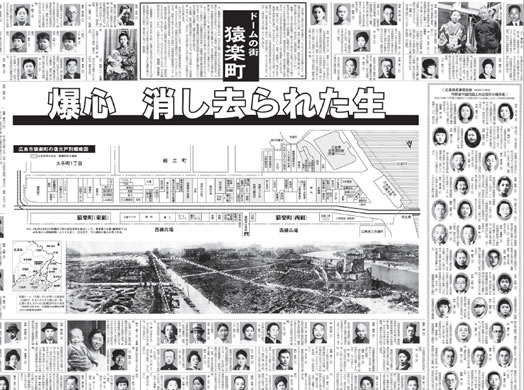 by Masami Nishimoto, Senior Staff Writer
(Originally published on July 23, 1997 in the series "Record of Hiroshima: Photographs of the Dead Speak")

“Let us, the survivors of this district, recreate our community by compiling a map of our neighborhood and pray for the repose of the people who died here.” In the summer of 1997, former residents who lived at the hypocenter of the atomic bomb united in an effort to convey their memories to future generations, confirm facts of the bombing, and pray for the souls who were lost. This neighborhood was called Sarugaku-cho.

Today, the old Sarugaku-cho district has been renamed and is crowded with tall, modern buildings. Before the bomb fell, though, Sarugaku-cho was filled with small shops: a furniture maker, a baggage maker, a bicycle shop, an umbrella shop, and many more. The people lived in rows of traditional two-story houses with lattice facades. In summer, children swam in the Motoyasu River and tested their bravery by venturing into the local cemetery. They also played ball on the grounds of the Hiroshima Prefectural Industrial Promotion Hall, today's Atomic Bomb Dome. But then, on the morning of August 6, 1945, it all disappeared.

Among the former residents of this community, only three still live in the area. However, 45 more former residents were found living elsewhere and most of these are A-bomb survivors. At the time of the bombing, they were working as mobilized students in factories and at other sites or entered the city afterwards to search for their families from the suburban areas where they had been evacuated earlier. The bomb took the lives of their parents and siblings and left no trace of them behind.

With the help of these former residents, the Chugoku Shimbun uncovered the facts surrounding 90 more residents who died by the end of 1945 and another who died in 1946. In addition, each building that had stood in the district was recalled and a map of the area was drawn. Ultimately, among the total of 122 victims that were identified, both residents of Sarugaku-cho and employees of the Hiroshima Prefectural Industrial Promotion Hall, photographs were obtained of 102 people.

According to a survey carried out by the city of Hiroshima in 1946, intending to establish the extent of damage wrought by the atomic bomb, Sarugaku-cho was comprised of 260 households and 1,505 people before the bombing. Although the number of residents on that day is thought to be fewer since some people had evacuated from the city, another survey conducted in 1995 revealed a death toll of just 240 people from 100 households. The gap between the original population and the confirmed dead highlights the reality of so many people simply unaccounted for following the blast.

The devastating power of the atomic bomb is laid bare by the fact that an entire community was annihilated that day, leaving behind few facts regarding the circumstances of how the people of the Sarugaku-cho district actually died. Most of them, as in neighborhoods throughout the city of Hiroshima, simply vanished from the earth.
ツイート
Return