Saiku-machi: The hypocenter, “a crumbling world” 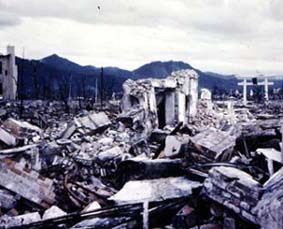 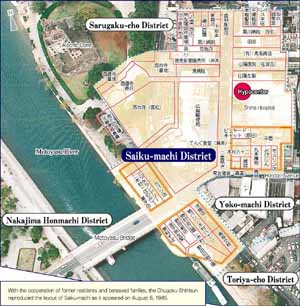 by Masami Nishimoto, Masanori Nojima and Junpei Fujimura, Staff Writers
(Originally published on February 21, 2000 in the series “Record of Hiroshima: Photographs of the Dead Speak”)

On August 6, 1945, the first atomic bomb ever used against human beings was detonated about 600 meters above Shima Hospital, at 29-2 Saiku-machi in Hiroshima. That location can be found 160 meters southeast of the A-bomb Dome. The bomb, known as “Little Boy,” used fissionable uranium-235 to deliver a blast equivalent to 15 kilotons of TNT--an amount of conventional explosives that ordinarily would have been carried by 3000 B-29 bombers.

The fireball unleashed by the explosion grew to a diameter of 280 meters, emitting tremendous heat and radiation, with the temperature on the ground reaching 3000 to 4000 degrees Celsius. The shock wave swept through the city like a tsunami, traveling at 440 meters per second. The poet Tamiki Hara, describing the Hiroshima of that day, called it “a crumbling world.”

Dr. Kaoru Shima (1897-1977), director of Shima Hospital, was not in the city at the time. He had left the day before to perform a surgical operation elsewhere in the prefecture, returning on the night of August 6. In his memoirs, he recounted what he found:

“Nothing was left except for two concrete pillars at the entrance… There were many dead bodies on the street near the hospital. I could identify only one person.” The area around the hypocenter was reduced to ashes, as the 1946 report by the U.S. Strategic Bombing Survey states: “In the immediate area of ground zero, the heat charred corpses beyond recognition.”

This article recalls the district of Saiku-machi, the location of the bomb’s hypocenter. The Chugoku Shimbun tried to document the deaths of the residents of this neighborhood as well as the employees of Hiroshima Post Office and the mobilized students who were working there.

In Saiku-machi there were nearly forty households, two temples, four hospitals and clinics, a wholesaler of food products and imported liquors, and the first barbershop in Hiroshima. The atmosphere in this delta community was a mixture of the old and the new, all of it completely razed by the bomb. The bereaved families could find no trace of their loved ones’ last moments.

“I couldn’t find the remains of my father or brother. I had to go on alone,” said Michiko (Kishimoto) Kono, 70, of Tokyo. “I stayed at a lodging house and worked as a tutor for the owners’ family. For a year, I wandered around Hiroshima, but . . .” Ms. Kono then left Hiroshima and did not return until the 33rd anniversary of the deaths of her father and brother.

We searched for relatives of the residents of this vanished community and finally found information on 72 of these residents, including nine covered in other articles of this series about Sarugaku-cho and Nakajima Honmachi, Part II. Those nine had relocated because of demolition work in the neighborhood. We also obtained photographs of 54 people and confirmed their names. They represent the lives lost in that “crumbling world.”
ツイート
Return