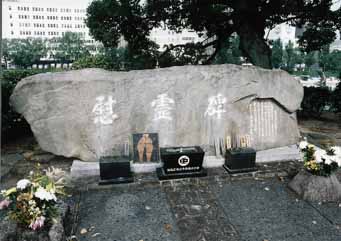 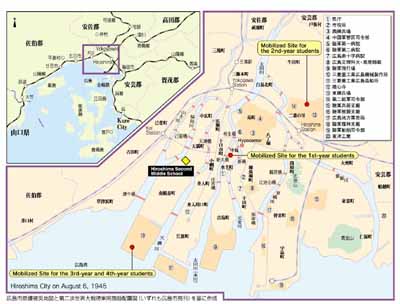 (Originally published on November 16 and 17, 1999, in the series “Record of Hiroshima: Photographs of the Dead Speak”)

Near the east bank of the Honkawa River in Hiroshima Peace Memorial Park, there is a stone monument about 1.5 meters high and five meters wide. On the back of this monument, the names of 344 students and eight teachers are engraved. The Bereaved Families Committee of Hiroshima Prefectural Second Middle School erected the monument in 1961. Many of the names inscribed there represent children who died when they were only twelve or thirteen years old, having just entered middle school in April 1945.

On the morning of August 6, these students were working in the former Nakajima Shinmachi district, where the monument now stands. In accordance with the National Mobilization Law of 1938, they had been mobilized to engage in the demolition of buildings near the east end of the Shin-Ohashi Bridge (today’s West Peace Bridge) for the purpose of creating firebreaks. The students were standing for roll call, and at about the time when the teacher finished giving them their instructions, the Enola Gay, carrying the atomic bomb, appeared in the sky overhead.

Only about 500 meters from the hypocenter, the children were knocked off their feet by the explosion and engulfed in flames. Some died on the spot. Others plunged into the river after they regained consciousness.

A mother who arrived at the scene on the evening of August 6 wrote, “The river was full to its banks with gravely injured children, some leaning against rafts in the water and crying for help.” A father who arrived the next morning said, “The dead bodies were already so bloated that they all looked the same.” He resorted to checking burned remnants of clothing and belts to try to identify his son.

The severely burned children who managed to get to their homes or to aid stations called for their fathers and mothers and asked about their friends as they lay dying. They struggled to sing military songs and to call out “Long live the Emperor!” Mothers, now in their late 80s, and brothers and sisters who had been mobilized or called to service themselves, recall those days with great emotion. “At that time, it was considered a matter of course--a feeling reinforced through education--for people to serve their country. After achieving entrance to their desired school, the children were living each day with enthusiasm.”

In this installment of “Photographs of the Dead Speak,” we have focused on each student whose name is engraved on the monument. We perused records kept by the alumni association of the school, which became Geiyo High School in 1948 and then Kanon High School in 1949. We examined various unpublished documents and contacted the bereaved families to learn when and how these students died and what thoughts they had in their final days. About 500 people responded to our letters and supported our work.

Among the 321 first-year students whose names are inscribed on the monument, we obtained information on 269 students. We also identified two more students, bringing the total to 271 first-year students. With the addition of older students and teachers at the site, there were 352 victims in all. Excluding two who died in an air raid in Kure, we were able to confirm 294 victims of the bombing and obtain 260 photographs.

Officially, these students were called the “Hiroshima Second Middle School Service Corps.” The first-year students at the demolition site in Nakajima Shinmachi were all dead by August 12, six days after the bomb exploded in the sky above them.