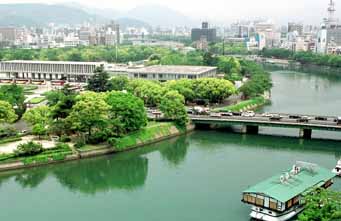 by Masami Nishimoto, Masanori Nojima and Junpei Fujimura, Staff Writers
(Originally published on June 22 and 23, 2000, in the series “Record of Hiroshima: Photographs of the Dead Speak”)

Peace Bridge spans the Motoyasu River next to Peace Memorial Park. The designer, the late Isamu Noguchi, said that this bridge represents “life.” Near the west end of the bridge stands a monument inscribed with the names of students from Hiroshima Municipal First Girls High School. There are 277 names of first-year students alone, along with many others. Reading these names today, one can only imagine how those girls lived. They were alive until the morning of August 6, 1945. Though it was wartime, they must have had great hopes for the future as they entered their chosen school. Their dreams, as well as those of their parents, ended with the bomb.

On August 6, first- and second-year students who were mobilized for the war effort gathered at the same work site as the day before. Their principal, Zoroku Miyagawa, was absent at the time and survived. In the book Floating Lanterns, compiled by the parents of the deceased students to commemorate the 13th anniversary of the atomic bombing, he wrote:

“The students gathered along the south side of the earthen wall of Saifukuin Temple for their morning assembly. They were told to leave their belongings--water bottles, lunch boxes and the like--by the wall. Some less able students were designated to watch those items as the others started to work.”

The work involved cleaning up the remains of houses that were being demolished to create firebreaks in case of air raids. The site was between Kobiki-cho, where Saifukuin Temple was located, and the west bank of the Motoyasu River, where the monument stands today. This area, now occupied by Peace Boulevard, was only about 500 meters from the hypocenter, and as the girls set to work, the bomb exploded high in the sky above them.

This time, “Photographs of the Dead Speak” considers the lives and the final moments of the first-year students of Hiroshima First Municipal Girls High School, which had the greatest number of students who died in the atomic bombing. This article continues our investigation into the students of Hiroshima, following the article Hiroshima Second Middle School: Children at the hypocenter.

The second-year students already had class photographs, but photos had not yet been taken of the first-year students. The alumni of First Municipal Girls High School and the succeeding Funairi Senior High School hold a memorial service every year, so we asked for their help at the 1999 gathering. Starting from the names of the bereaved families listed in Floating Lanterns and the list of attendees at the 33rd memorial service, we searched for the girls’ families, many of whom are now headed by younger generations.

Among the 277 first-year students, divided among six classes, who died in the bombing, we found information on 243 students and collected photos of 212 students, including photos taken when they graduated from elementary school. We have also published the photos of six teachers.

The remains of most of these girls, who had believed fervently that Japan would win the war, were never recovered. It is reported that 23 first-year students survived, having been absent from the site that day because of family matters or fatigue from working under the hot sun. We received letters from 13 of the survivors we were able to contact. They told us what they hoped would be remembered.

One of them ended her letter with these words: “We wanted to study. We wanted to live. Please understand the bitter disappointment of these students, whose lives were cruelly taken from them. Do not feel that this merely happened to others, but feel this pain as your own.” Four months after they entered their new school, these students were dead at the age of 12 or 13.
ツイート
Return