Hiroshima Post Office: Death in the line of duty 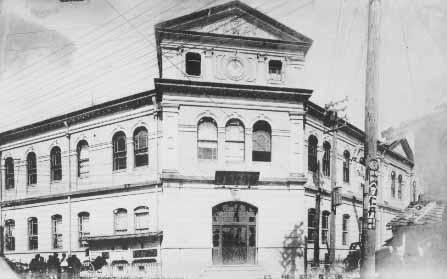 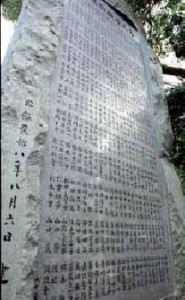 by Masami Nishimoto, Masanori Nojima and Junpei Fujimura, Staff Writers
(Originally published on February 24, 2000 in the series “Record of Hiroshima: Photographs of the Dead Speak”)

In the city of Hiroshima, the Hiroshima Post Office was simply known as “Honkyoku” (“Head Office”). Located at 28 Saiku-machi (now Otemachi), the office was built in 1893. The three-story building was made partly of brick and had one basement floor. Early in the 20th century, Ujina Port became a base of logistics for military personnel and supplies, so this office handled a great deal of military mail and was a major center of communications in Japan.

On August 6, 1945, the atomic bomb exploded almost directly above the “Head Office.” Shima Hospital, at the hypocenter, was right across the street. Volume Three of Record of the Hiroshima A-bomb Disaster, published by the city, describes the horrific scene: “At the burned site of the Post Office, nothing remained but huge numbers of bones and charred corpses lying among the debris.”

This issue of “Photographs of the Dead Speak” concerns the people who died while on duty at Hiroshima Post Office. Since land boundaries were readjusted after the war, the “Monument to the Employees of the Hiroshima Post Office” was built at Tamon-in Temple in 1953. The names of 288 employees and mobilized students are inscribed there. The Chugoku Shimbun looked for surviving family members of the victims and others who knew them, checking the names on the monument and in the memorial book Ishibumi (Monument) published for their 33rd memorial service, in order to report on the lives and work of the deceased and their families.

We confirmed the deaths of 173 regular employees, forty mobilized fourth-year students from Gion Girls High School, one teacher from that school, eight 8th grade students from Honkawa National School (now Honkawa Elementary School), and one of their teachers, all of whose names were inscribed on the monument. During the search, we also discovered three former mobilized students who are still alive. However, we also discovered that another Gion student and eight small children who were in the Post Office employees’ nursery were among the dead. In all, we confirmed the deaths of 232 people and found photographs of 160 of them. Excluded, though, are one employee of the Hiroshima Communications Bureau and five people who were recorded among the residents of Saiku-machi and other areas.

Most of the victims were breadwinners for their families, and many were mothers. Women, in fact, accounted for 45 percent of the deceased employees. Mitsugu Michikawa, 87, was exposed to the bomb during collection and delivery duties and recalls that “women were hired on a temporary basis as male employees were conscripted into the military.” As still more workers were needed, students from Gion Girls High School took over clerical jobs starting in October 1944 and boys from Honkawa National School began performing delivery work.

As part of preparations for a decisive battle to defend the Japanese mainland, in July 1945, the government established the Western General Communications Office in Hiroshima, where the military’s Second General Headquarters were located, with the objective of securing communications in western Japan. However, as the Postal Service Centennial record states, “In the midst of the preparations, on August 6, the whole city was turned to rubble.” Standing directly under the explosion, the “Head Office” instantly collapsed and all of the men, women, and students who had been dubbed “Communications Warriors” were dead by August 9, 1945.
ツイート
Return