As Centuries Pass, Part I: Images of horrific power and human tragedy speak 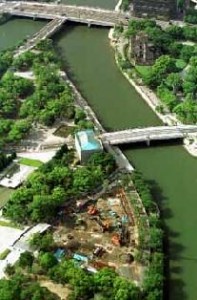 by Masami Nishimoto, Masanori Nojima, and Junpei Fujimura, Staff Writers
(Originally published on June 28, 2000 in the series “Record of Hiroshima: Photographs of the Dead Speak”)

The series “Record of Hiroshima: Photographs of the Dead Speak” has been seeking information on the deaths of each resident, worker, and mobilized student in the hypocenter area that was annihilated by the atomic bomb on August 6, 1945 and later reborn as Peace Memorial Park. Over the past three years, thanks to the cooperation of surviving family members and classmates, the series has ascertained how 2369 persons in the hypocenter area died and obtained photographs of 1882 of those persons. We are pondering how to use the power of these photographs to convey the reality of the bombing beyond the borders of nationality and time.

A facility is presently under construction on the east side of Peace Memorial Park at a total projected cost of 3.6 billion yen. The structure comprised of one ground floor and two underground floors will cover 3000 square meters and open its doors in 2002 as the Hiroshima National Peace Memorial Hall for the Atomic Bomb Victims.

Construction of the Memorial Hall was one of the projects outlined in the Hibakusha Relief Law for which hibakusha began campaigning in the mid-1950s. That law was finally enacted in 1994, a year before the 50th anniversary of the bombing.

The Ministry of Health and Welfare, which is supervising the project to build a Peace Memorial Hall for the Atomic Bomb Victims, both in Hiroshima and Nagasaki, created the Opening Preparation Study Council to bring expert opinion to the task of establishing guidelines. In its final report issued two years ago, the council concluded: “The exact number of A-bomb victims is unknown,” so both cities will use the “estimated number submitted to the United Nations in 1976.” For Hiroshima, that number is said to be 140,000 ±10,000 as of the end of 1945.

But the “estimated number” will never put to rest the question of how many people actually died: residents; “volunteer” groups, including a huge number of students from the city and surrounding areas whose mobilization for building demolition was ordered by the national government; soldiers and civilian personnel connected to the Second General Army Headquarters stationed in Hiroshima in preparation for a “decisive mainland battle”; a great number of people from the Korean peninsula… The number will remain unknown because the authorities have failed to investigate the facts that would provide a complete picture of A-bomb destruction.

Koshiro Kondo, 67, head of the Hiroshima Alliance of A-bomb Survivor Organizations, believes that the government means to “…obscure responsibility for the war that led to the dropping of the atomic bombs.” The younger brother of a 15-year-old mobilized student who perished, Kondo says, “With so much focus on relief for the A-bomb survivors, a strain has developed between two groups: on one hand, hibakusha who have campaigned for special support and on the other, hibakusha who have remained silent and surviving family members, not all of whom are hibakusha. But mourning the dead is the starting point of the peace movement. I want the new prayer hall to foster a way for more visitors to empathize with our grief and join a new movement.”

The core space in the prayer hall is the Hall of Remembrance, 18 meters wide with a vaulted ceiling 8 meters high. The 140,000-panel design on the wall both depicts a panoramic view of the ruined city and represents the estimated number of the dead. Though requested by survivor organizations to engrave the names of the dead on that wall, the Ministry of Health and Welfare demurred, citing the impossibility of identifying all the victims. At the same time, the Ministry has decided to create an “archive of names and photos” as a result of a request from the bereaved families.

The cities of Hiroshima and Nagasaki will begin collecting photographs of the dead from April 2001. The Ministry of Health and Welfare’s Bureau of Public Health and Medicine states, “We are creating a database and allowing public access to it. Though space is limited, we are studying the possibility of displaying the photographs in the hall as well. The Bureau will soon put up posters in local government offices and related facilities requesting people to entrust photos of their lost loved ones to the project.

Nori Tohei, 71, became the co-chairperson of the Japan Confederation of A- and H-Bomb Sufferers Organizations in June 2000. He experienced the atomic bombing as a first-year student at Hiroshima College for Teachers (now, Hiroshima University). From his home in Tokyo, he commented, “Every person who died had a name. Every person I couldn’t save had a name and a life. If the government will work to bring their names to light, I will gladly cooperate with this effort.”

A creation of the 20th century, the atomic bomb is a weapon of mass destruction. “Photographs of the Dead” feature the historical witnesses who silently convey, as centuries pass, its horrific power, its human tragedy.
ツイート
Return