As Centuries Pass, Part II: Memories that must not be forgotten 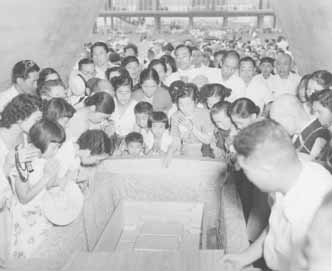 by Masami Nishimoto, Masanori Nojima, and Junpei Fujimura, Staff Writers
(Originally published on June 29, 2000 in the series “Record of Hiroshima: Photographs of the Dead Speak”)

Engraved on the Cenotaph for the A-bomb Victims in Hiroshima Peace Memorial Park are these words: “Let all the souls here rest in peace; for we shall not repeat the evil.” Since the monument was built in 1952, while Hiroshima was still re-emerging from rubble, each year during the Peace Memorial Ceremony successive mayors have consecrated to it new names of A-bomb victims. At present the registry contains 212,116 names. This year, too, City Hall began registering names from June 21. The names of victims who died since last year’s ceremony and those of newly-identified victims will be added on August 6, 2000--the last dedication of the 20th century.

The registry within the stone chamber made of granite from Kurokami Island in the Seto Inland Sea lists the enormous number of people who died as a consequence of the world’s first atomic bombing on August 6, 1945. However, the registry can no longer be touched or seen, even by bereaved family members.

“Turning the registry into a kind of time capsule, locking up the names of the dead, effectively seals off its meaning and the message that we want to convey.” Kunihiro Shimazu, professor of Hijiyama University and member of the Peace Memorial Museum’s Materials Research Committee, also made proposals last year on how the museum could better display materials.

“In view of how the global nuclear situation has developed since Hiroshima and Nagasaki, I have to say, ‘Please get up and continually tell this story!’ Let’s collect as many photos of the dead as we can and show them to people. This is the way to starkly convey the human tragedy and move visitors.”

For the last three years, the Chugoku Shimbun has been requesting the cooperation of bereaved families in its pursuit of stories of what happened on August 6 to people who were living, working, or mobilized to labor in the neighborhoods that later became Peace Memorial Park. One of these neighborhoods was Sarugaku-cho, which vanished entirely except for the shell now called the A-bomb Dome. On the verge of the 21st century, we sought to clarify, to the extent possible, the facts behind deaths that have remained unknown to this day.

Stirred by this investigation, former residents of Sarugaku-cho created a residential map of their neighborhood as it was around 1940, and put up an “Atomic Bomb Damage Explanation Panel” near the A-bomb Dome. In April, Hiroshima Second Middle School (now, Hiroshima Kanon High School) engraved on the school monument the names of two more students whose deaths were newly confirmed through this effort. And this year, residents of Motoyanagi-machi, which stood on the west side of the park, will hold a memorial ceremony for the lost neighborhood, their first in 55 years. Their purpose: “To convey to the next century the thoughts and feelings of the dead and the survivors.”

Over the past three years we have communicated with more than 3,000 bereaved family members. As children, a number of them had been evacuated to a rural location prior to the bombing and then remained silent all these years about losing their entire families. Others lost their spouses and later remarried, but had kept their experiences a secret. For some, our requests to speak with them threatened to reopen wounds that had not truly healed and so we were rebuffed. Each in their own ways, the survivors were forced to struggle with their personal tragedies in order to live out their lives.

Contacting the bereaved uncovered the fact that a considerable number of A-bomb victims were not registered in the Record of the A-bomb Disaster compiled by the city of Hiroshima in 1946. And this process also revealed that, though many names are inscribed on the memorials dedicated to former residents or mobilized students, the circumstances of the deaths of a large number of people are still not known. In fact, we managed to confirm only a fraction of the deaths of the people who perished “that day.”

“The question is how we go about conveying the human experience of the atomic bombing,” says Associate Professor Satoru Ubuki at the Research Institute for Radiation Biology and Medicine at Hiroshima University. He feels we should demonstrate the reality of the bombing by communicating the personal challenges that individual survivors have experienced.

The experience of the atomic bombing does not naturally fade as time passes. When people who live in the present day no longer maintain these memories, the experience will disappear. “Photographs of the Dead Speak” is an attempt to give voice to these memories.
ツイート
Return