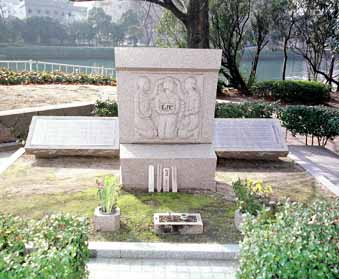 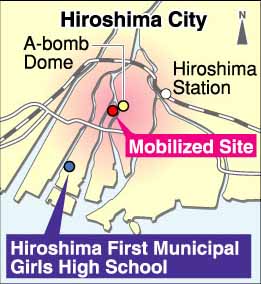 by Masami Nishimoto, Staff Writer
(Originally published on February 28, 1999, in the series “Record of Hiroshima: Photographs of the Dead Speak”)

The A-bomb Monument of the Hiroshima Municipal Girls High School stands on the west bank of the Motoyasu River near the south end of Hiroshima Peace Memorial Park. The relief on the front of the monument depicts a girl in a sailor-style school uniform and work pants, surrounded by two friends, one holding a wreath and the other a dove. On the back is inscribed, “Rest in peace on this green hill, embraced by your friends.”

The students of the First Municipal Girls High School, widely known as “Ichijo” (“Municipal Girls”), had been mobilized that day for demolition work on buildings in the area where the monument now stands. The dead include 541 students in the first- and second-year classes, 666 students in the third- and fourth-year classes and in the advanced course, and ten teachers. The school, which had the largest number of victims among all schools in Hiroshima, ended its 27-year history in 1948 when the education system was reformed, becoming Hiroshima Municipal Funairi High School.

The bereaved families and the few surviving classmates of these students kept group pictures of the students, dressed in sailor-style uniforms and work pants, that had been taken when they entered school, still filled with hopes for the future. But they died on the bank of the Motoyasu River, their bodies lying in heaps. Based on pictures of the six classes of second-year students and information kindly provided by the few survivors we found, we have tried to reconstruct what happened to these children.

In 1944, the year the second-year students entered their school, the Student Labor Service Order was issued by the national government. In accordance with that order, these classes of girls were mobilized to an area currently at the south end of Peace Memorial Park. The scheduled one week of work, on a demolition project, started on August 5. The next day, according to the records of one bereaved family, their remains were “naked, underwear in tatters, hair disheveled, in such a state that not one could be identified.” All of them were thirteen or fourteen years old.

One former classmate responded to our request for information and indicated that she had also lost her mother, her sister, and her house to the bomb. “My classmates died in agony, but I survived because I was absent that day. This has tortured me throughout my life. It is hard to speak of this at all.” She added that she had cried at the sight of her class picture “thinking of how hard we tried to survive those times together.”

In producing this article for the series “Photographs of the Dead Speak,” we awoke some painful memories and feelings of guilt among those who survived the bomb as others perished. The class photographs show 310 people. Among those pictured, we confirmed the names of 224 who died in the bombing. We also received pictures of two students who transferred to the school after the class photos were taken, and also died. In addition, 30 people recalled for us their own experiences of the atomic bombing and memories of their lives as students of the First Municipal Girls High School.
ツイート
Return