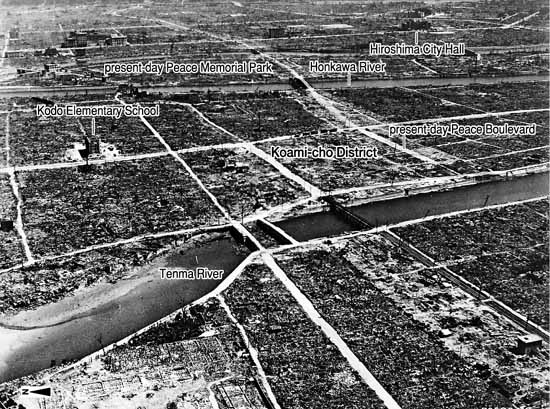 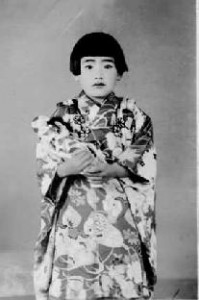 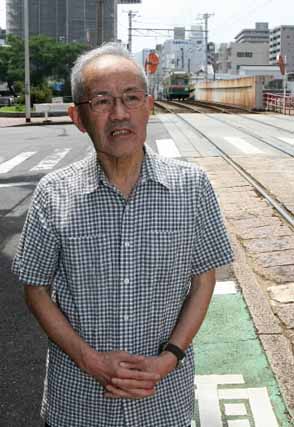 A sister gone, a survivor’s guilt

It is often said that the experiences and memories of the atomic bombing are fading. But is this really true? First Hiroshima Prefectural Girls’ High School (today, Minami High School) lost 223 first-year students alone in the bombing. Among them, 42 students in Class 6 of that grade level, who had commuted from the western part of the Hiroshima delta or beyond, became victims. How did the girls die and what can their families say about their loved ones’ fates? The Chugoku Shimbun explored these questions on the 63rd anniversary of the atomic bombing. [Formerly, the school system in Japan, for girls, had one upper level school after elementary school, for five years, called “high school.”]

The crossroads of life and death

“The day before the bombing, I was involved in the demolition work here, too,” said Heitaro Hamada, 78, a resident of Nishi Ward, as his streetcar came to the Koami-cho stop.

On the morning of August 6, 1945, his younger sister, Takako, 12 years old and a first-year student in Class 6 at the Girls’ High School, was mobilized to take part, for the first time, in dismantling houses in Koami-cho. The area is located about 800 meters southwest of the hypocenter.

The demolition work had been ordered by the government to create a fire lane in preparation for possible air raids by the U.S. military. The lane was intended to be 100 meters wide, running east and west through the center of the city. According to city records, the residents of the Koami-cho District had been ordered to evacuate the area by July 28, 1945. To help clear the dismantled buildings, boys and girls, aged 12 to 15, were mobilized from their schools to perform this labor.

The blast left Takako with severe burns that covered her body, but she still managed to reach Koi Elementary School, about 3 kilometers northwest of the hypocenter. This news was then reported to her family at their home in Furuta-machi, on the outskirts of Hiroshima. As her father had already passed away due to illness in the spring of 1945, Mr. Hamada, Takako’s older brother, rushed to see her. He was a third-year student at Hiroshima First Middle School (today, Kokutaiji High School) and had stayed home that day to fully recover from a chest ailment.

“Her appearance had totally changed. I could hardly recognize her,” recalled Mr. Hamada. “I asked her ‘Takako, is it you?’ and she nodded weakly.” He then took Takako home on a cart and their mother laid down with her on a futon and took care of her. “Water, water…it hurts, it hurts…” she murmured softly through the night. Takako then passed away in the early morning hours of August 7.

Mr. Hamada’s older sister, Teruyo, 21 at the time, had been working for the Industrial Bank of Japan in Sarugaku-cho (now, Kamiya-cho) after graduating from the same school that Takako had begun attending. Teruyo also perished in the bombing and Mr. Hamada was unable to find her body. Just 15 years old, he and his mother were left to carry on after his sisters were lost to the A-bomb.

In the following year, 1946, Mr. Hamada helped edit a collection of essays, entitled “Fountain,” on the experience of the bombing. The book, the first of its kind in Hiroshima, consisted of essays written by boys at Hiroshima First Middle School and girls at Hiroshima Prefectural Girls’ High School. Among his classmates who had gone to work in Koami-cho on August 6, at least 38 died in the bombing.

However, after graduating from present-day Hiroshima University and becoming a Social Studies teacher at junior high schools in the city, Mr. Hamada “avoided the atomic bombing.” Although asked to join the Hiroshima Prefecture A-bombed Teachers Association, established in 1969, he declined the invitation. And when peace education classes grew more widespread in the 1970s, he continued to maintain silence over his own experience. In fact, he rarely even mentioned his experience to his wife. What was behind this reluctance?

“I only survived because I skipped going to the demolition site that day,” Mr. Hamada said. “I was reluctant to speak because of the guilt I still feel.” Looking back at his past, he added, “People might say that I was too slow to adopt this attitude, but I now see that those left behind must speak out on behalf of the dead.”

Mr. Hamada’s essay on his experience of the bombing while searching for his sisters and classmates is included in the book “White Flowers,” a collection of testimonies published in 2004 by the Association of Teachers Continuing to Speak about Hiroshima. His essay, entitled “My Path,” ends with the sentence: “Our location at 8:15 that morning was in fact the crossroads of life and death.” A sense of mourning lingers in his mind, having survived “that fatal day” while so many he knew, students who had believed in the nation and its teachings, suddenly perished.