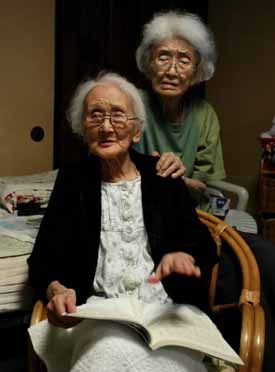 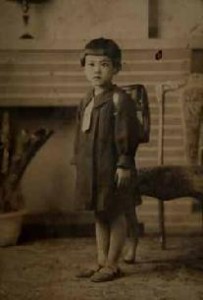 A mother cherishes her daughter’s life

Sixty-three years after the atomic bombing of Hiroshima, I visited the mother of one of the girls who attended First Hiroshima Prefectural Girls’ High School. Yoshimi Hashimoto, then 13, was a first-year student in Class 6. Her mother now lives near Murozumi Beach in Hikari City, Yamaguchi Prefecture. Murozumi Beach is located on the coast of the Seto Inland Sea and is a popular swimming spot. Yoshimi’s mother, Tomiko Hashimoto was born in September 1911 and is 96 years old. She sat up in bed and spoke with her hands in her lap.

“Yoshimi always had a strong spirit,” Ms. Hashimoto said. “After the bombing, she made it home by herself and managed to live for 17 days.” Due to her husband’s job transfer to Hiroshima, the family came to live in the neighborhood of Rakurakuen, not far from an amusement park. Their only child, Yoshimi, commuted from there to First Hiroshima Prefectural Girls’ High School in the heart of the city, alongside today’s Peace Boulevard.

“A soldier carried Yoshimi home on his back,” interjected Ms. Hashimoto’s younger sister, Toshiko Fujiwara, 85, correcting her memory. At the time, Ms. Fujiwara lived with her older sister’s family and worked as a clerk at a military unit stationed at Rakurakuen Amusement Park. Each time her younger sister stepped in to shore up her memory of the past, Ms. Hashimoto smiled and said, “You really have a good memory.”

One of Yoshimi’s classmates at the Girls’ High School provided an essay that Ms. Hashimoto had written, in 1976, about her daughter’s experience of the bombing. “Her teachers and schoolmates were all practically stripped of their clothes.” “When I touched her head, her hair would fall out.” In seven pages, Ms. Hashimoto recounted what her daughter had told her about the destruction at her work site in Koami-cho, about 800 meters from the hypocenter, and she described Yoshimi’s failing health that led to her death on August 23.

When she read her own writing, Ms. Hashimoto began adding further detail to the 17 days her daughter fought to live, as if returning to that time. “Yoshimi said she was happy that she had made it back to me,” recalled Ms. Hashimoto. “She was very sick and weak, but she brought herself to walk with me out in the garden. Holding on to me, she said, ‘Mother, I don’t want to die.’ At that point, Yoshimi already knew about her father’s death.” Ms. Hashimoto’s husband, Yoshihiko, perished at his workplace, the Chugoku Coal Ration Control Company, which was located near the hypocenter. In fact, Ms. Fujiwara and another woman named Ms. Nagai, who were both mobilized with the Akatsuki Shipping Transport Unit, went into the city center to search for Ms. Hashimoto’s husband, but they were unable to find him. He died at the age of 37.

Ms. Hashimoto’s essay also reveals her long and overwhelming anguish after the war. “I had survived, but it was like I was dead,” she wrote. “I went on, though, barely living, feeling it was my duty to pray for the repose of my husband’s and my daughter’s souls.” For support, she turned to her aunt and moved to Yamaguchi Prefecture, where she worked in the dormitory of a pharmaceutical company.

Ms. Fujiwara, Ms. Hashimoto’s younger sister, lost her husband seven years ago and now lives with Ms. Hashimoto who can no longer walk on her own. Ms. Fujiwara does not hold an Atomic Bomb Survivor’s Certificate, although she entered the city on the third day after the bombing. “I can’t find any witnesses who will testify on my behalf so I can qualify as an A-bomb survivor,” she explained. Then she smiled and said, “My sister and I still enjoy our outings twice a week to the public bath.”

Ms. Hashimoto teared up many times as she looked back on her life. Nevertheless, she stressed, “I am so grateful I had a chance to think of Yoshimi for so long.” Only a mother who has cherished the memory of her much-loved daughter for most of her life could make such a remark.