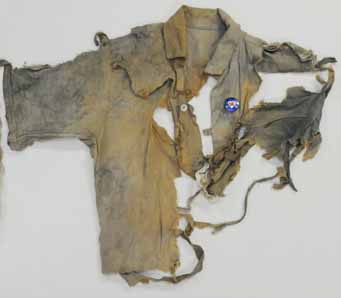 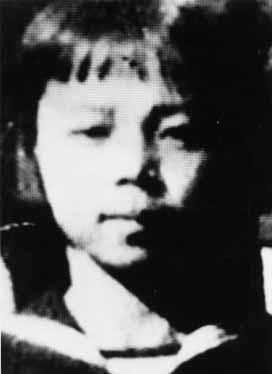 A new uniform for summer, shredded by the blast

The “summer uniform of a female student” is on display at Hiroshima Peace Memorial Museum. The explanation of the clothing reads: “The girl was carried home to her parents but died late that night. She had made this uniform herself.” Placed near a panoramic view of the ruined city, this exhibit, one of the personal artifacts from August 6, 1945, silently beckons visitors to stop and reflect on its background.

The uniform belonged to Nobuko Oshita, then 13 years of age and a first-year student in Class 6 at First Hiroshima Prefectural Girls’ High School. Her father, Sadao, and mother, Masue, who donated her clothes to the museum 20 years ago, are now dead, but I was able to meet with her older sister, Yoko Fukumori, 77. She now lives in Yamaguchi Prefecture.

“When my sister was brought to Otake Elementary School that evening, I hurried over there,” recalled Ms. Fukumori. “She asked for some water and I gave her some, but I spilled it as I brought it to her mouth. ‘Yoko, you’re so clumsy,’ she told me, joking. I never dreamed she would die.”

Ms. Fukumori treasures the diary that Nobuko was keeping in 1945, which was passed on to her by her parents. From April 6, the day of her entrance ceremony at school, to July 15, Nobuko penciled earnest descriptions of her days during wartime. “I am determined to study hard,” she wrote.

On June 13, she began sewing her school uniform for the hot summer months. “This year we have to make our uniforms with khaki or gray fabric, not white, because white clothes can be spotted easily by enemy planes.” Happy with the fabric her mother gave her, she wrote, “I’m thrilled with the khaki fabric!”

On August 6, clad in the uniforms they themselves had made, Nobuko and 222 other students headed for their worksite where houses were being dismantled to create a firebreak. That area, called Koami-cho, was fated to become a spot just 800 meters from the A-bomb’s hypocenter.

Ms. Fukumori vividly remembers the day before the bombing. When she was leaving her assigned worksite, a paper mill, she found her younger sister Nobuko waiting for her at the gate. They then went swimming in the river.

At the time, Ms. Fukumori was a third-year student at Iwakuni Girls’ High School (now, Iwakuni High School) and was keeping her own diary. Suggesting the great shock that the family experienced on August 6, this page was left blank. However, the next day, on August 7, Ms. Fukumori devoted four pages to a detailed entry on the death and funeral of her “dear and only sister.”

According to this entry, after Nobuko was brought home from Otake Elementary School, Ms. Fukumori went to bed at around 10:00 that night. “I then heard Mother and Father crying so I knew something was wrong. I jumped out of bed and rushed to the room where Nobuko lay. Mother and Father were holding Nobuko, whose hands were already growing cold.” In regard to cremating Nobuko’s body, the entry continued, “Mother said that the girl who was cremated after Nobuko was her classmate at the same elementary school so I hope she won’t be lonely and will be happy playing with her friend in heaven.”

Ms. Fukumori now has five grandchildren. As she returned Nobuko’s diary to a box for safekeeping, she remarked, “My grandchildren have had many opportunities, through videos and other avenues, to understand about war and the atomic bombings, so they should have some awareness of these things. Still, I don’t know how much they can really comprehend. I mean, the era they have grown up in is so different from my own.”

She added, “I would be pleased if people can learn what lies behind Nobuko’s uniform and communicate to others the fact that so many girls were cruelly killed by the bomb and deprived of their lives.” On August 6, she will again attend the memorial ceremony held in front of the monument that stands at the former site, alongside Peace Boulevard, of First Hiroshima Prefectural Girls’ High School.