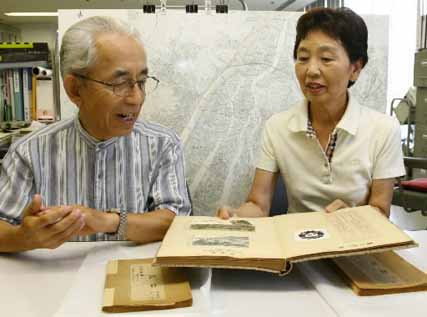 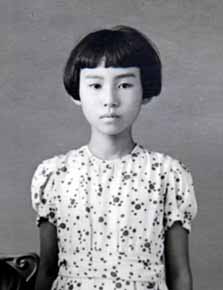 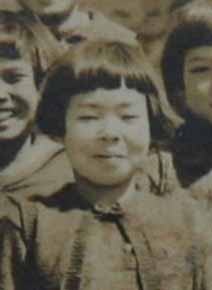 In 2004, the diaries of two friends, both first-year students in Class 6 at First Hiroshima Prefectural Girls’ High School, were donated to Hiroshima Peace Memorial Museum. The diaries, which followed the girls’ lives from the day of their school entrance ceremony in April 1945, coincidentally found their way to the museum, one after the other. On August 6, the day of the atomic bombing, the diaries were left blank when the girls fled the destruction together.

Midori Yamada, 12, and Etsuko Kumamoto, 13, “came back hand in hand,” said Reiko Takaishi, 69, Midori’s younger sister and a resident of Hiroshima. Midori and Etsuko fled a distance of about 3 kilometers, from their worksite in Koami-cho to the home of Ms. Takaishi’s relatives.

“Midori had terrible burns all over her body,” recalled Ms. Takaishi. “Mother rushed over there and tried easing the burns with cooking oil. I was so frightened, though, that I hesitated about even bringing water to her.”

Late that night, Midori whispered to her mother, “Let’s leave here…” and then she passed away. Their father, who experienced the bombing near Sumiyoshi Bridge, 1.4 kilometers from the hypocenter, managed to survive. When he found the family the next day, he learned that Midori had died the night before. The parents then cremated their older daughter.

After fleeing with Midori, Etsuko was then taken to a relative’s house in Koi. When her father arrived there, he decided to bring her back to their home in Kusatsu the next morning. Etsuko’s younger brother, Takatoshi Kumamoto, 71, still lives there today. Mr. Kumamoto shared his father’s notes, entitled “Record of that Day,” which describe his experience of August 7.

That morning, when their father was carrying Etsuko home on a plank of wood, she apparently regained the sight she had temporarily lost. “Can you see me?” said her father. “Yes,” Etsuko replied. “I’m so glad. Let’s go home,” he said. Etsuko then flashed a look mixed of happiness and sorrow. Her health then abruptly failed and she died before they reached home.

Prior to the bombing, Mr. Kumamoto had been evacuated, along with other younger children, to the countryside north of the city. After Etsuko’s death, he refrained from asking his parents about her, sensitive to the way they held on so preciously to her diary.

Why did Mr. Kumamoto decide to donate the diary--which contains family memories, too--to the museum? He shared his thoughts at the family home where his parents had hung a citation for the war dead awarded to his sister by the Japanese government.

“Reading her diary closely, it’s clear that she had believed wholeheartedly in the nation and in adults. And yet she lost her life. I hope young people will read her diary and ponder how this happened,” he said.

Ms. Takaishi, Midori’s sister, remarked, “Even today, I wish I could somehow suppress my memories of the bombing.” Their father had to retire from his job as a teacher due to the harmful aftereffects of the bomb’s radiation and their mother was forced to support the family by herself through her own teaching job. Living to the age of 96, the mother faithfully aired out the pages of Midori’s diary every summer. With their mother’s feelings in mind, Ms. Takaishi donated the diary to the museum in her name, Setsuko Yamada.

Midori’s diary ends with an entry on August 1. “Hisako finally returned to school,” Midori wrote. “Everybody was so happy to see her.” The entry refers to Hisako Motokawa, 14, who came back to school that day after being absent due to illness. Hisako’s remains were never found.

Etsuko’s last entry was on August 5. “I’m a little worried about my mother,” she wrote. On August 4, her mother had worked for the Volunteer Corps and now wasn’t feeling well so Etsuko prepared supper on August 4 and 5. Then, on the morning of August 6, she left home for her worksite in Koami-cho.