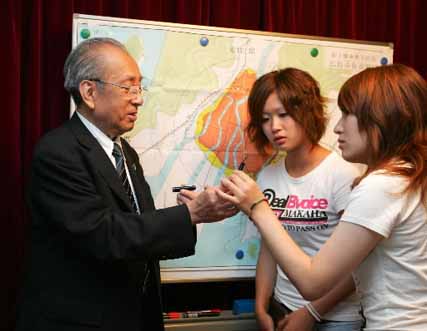 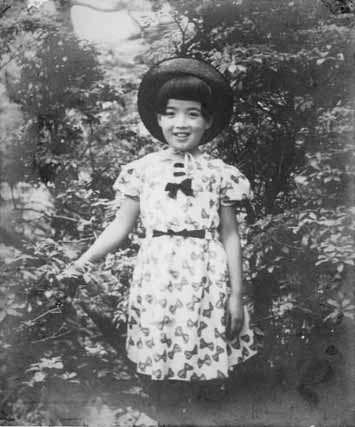 It’s a very hot day, but as always, Koji Hosokawa, 80, of Hiroshima, sets out in his suit to where he will be speaking about his experience of the atomic bomb. In his bag, along with a map which illustrates the devastation of the city, he has safely packed his sister’s fountain pen, which he keeps in memory of her.

“I was working at the Hiroshima Communications Bureau, 1.3 kilometers from the hypocenter,” begins Mr. Hosokawa, as he recounts the time of the blast, continuing to the moment he arrived home and learned that his sister had been killed. He is speaking to 22 third-year students of Hosei University Girls’ High School, visiting from Yokohama on a school trip.

On August 6, Yoko Moriwaki, 13, a first-year student in Class 6 at First Hiroshima Prefectural Girls’ High School, was carried to a relief station on the outskirts of the city in the aftermath of the bombing. There, she asked that someone contact her mother in Miyajima and hold her hand. Shortly after, she passed away.

“Tomorrow I will help clean up at the building demolition site,” Yoko wrote on August 5. “I will work as hard as I can.” Until this last entry, she had written in her journal every day after entering high school in the spring of that year.

In 1996, one year after the 50th anniversary of the bombing, Mr. Hosokowa published a book, entitled “Yoko Moriwaki’s Diary.” In this book he included such mementos as the fountain pen she used to record her entries, the letter written by the caring person at the relief station which set down Yoko’s final moments, and a song composed by her father, a music teacher who returned to Hiroshima from China the next year, dreaming of the day he would see his daughter again.

In fact, Mr. Hosokawa and Yoko did not share the same biological father and they only lived together as a family for 11 days, until the atomic blast. Still, he says, “The death of my sister, after we were finally able to live together, is the saddest thing in my life.” Publishing her diary was the result of his wish “to leave proof that my sister once lived.” As he was typing up her journal entries into his computer, “Yoko came to life again and I was so happy for the chance to hear her voice.” Mr. Hosokawa shared this story of his family at the house where he cared for Yoko’s father until his death.

After the diary was published, some of the entries were printed in junior high history books and this prompted Mr. Hosokawa to begin speaking to children about the bombing, both students in Hiroshima and those visiting from other parts of Japan. Before this, he had avoided talking about his sister’s death, even with colleagues who had experienced the bombing themselves.

In March of this year, as the city of Hiroshima organized a series of Atomic Bomb Exhibitions in the United States, he was asked to speak in conjunction with exhibitions held in California. When someone posed the question “Do you hate the United States?” Mr. Hosokawa responded frankly with the thoughts he had pondered over the years.

“I am furious that innocent people were burned to death,” he replied. “However, my hatred is toward war itself. War is terrorism, waged by national governments.” After he spoke, the audience applauded. By telling the story of his sister’s life and death, and the other students of her school, he felt he was able to convey the story of Hiroshima.

Mr. Hosokawa now speaks about his experience of the bombing 50 to 60 times a year. His mission is not simply that his own story be heard and understood; he seeks to “pass on the tragedy of Hiroshima by sharing it with his heart so that people can feel as though it could just as well be their own story.” The realization that he has little time left drives him on in this effort.

Mr. Hosokawa spoke to the third-year students from Hosei University Girls’ High School for nearly an hour-and-a-half. After his talk, a number of students lingered to express a new awareness of the bombing. “This isn’t just about someone’s sadness.” “Hearing about the A-bomb from someone who was there, it made everything real to me. It made me think.”

When the students touched the fountain pen, they touched the reality of Yoko Moriwaki, a young girl just like themselves.