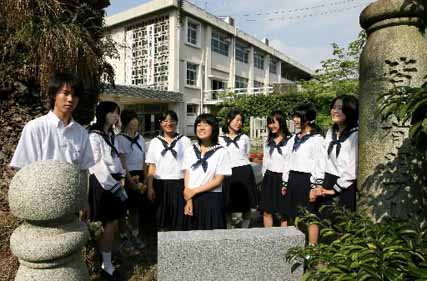 “I want to learn more”

First Hiroshima Prefectural Girls’ High School was located in the heart of Hiroshima and the atomic bombing flattened all its buildings and burned them to ashes. However, a class diary, “Student Diary Record 1945,” managed to survive the devastation. The parents of a girl attending the school then kept it in memory of their daughter and, 31 years later, brought it to Minami High School, formerly the Girls’ High School. A duplicate of this diary is available to the public at Hiroshima Central City Library.

The diary was begun April 9, three days after the school’s entrance ceremony, with the students of Class 6 taking turns writing messages, thoughts, and about the content of their lessons.

Classes at the school, in fact, had become routinely suspended due to air raid warnings since the school year began and each time the students were forced to take shelter. Then, from June, they were mobilized for work leveling the ground of the Yoshijima Army Airfield and reclaiming the land for crops at the East Drill Ground as well as attending meetings of the Student Corps.

In July, when cries rose for a “decisive battle on the mainland,” due partly to food shortages, an increasing number of students were absent from school. The diary’s last entry was made on July 31, with the July 30 entry asserting: “We’ll never give up. We’ll continue studying and training.”

Today, how do the 1,029 students of Minami High School perceive the deaths of their predecessors 63 years ago? The first- and second-year students of the student council and the brass band plan to attend a memorial ceremony for the lost students on August 6. With the cooperation of the school, I was able to interview nine of them.

Except for one girl who had heard about it from her grandmother, a graduate of Minami High School, the deaths of 223 students in the midst of dismantling houses to create a fire lane was something the other eight students had just learned “for the first time today.” Their principal, Nobuhiro Suga, 57, had spoken about it that day in a ceremony marking the end of the first school term, just before my interview. Mr. Suga had asked the students, “Are you living your lives to the full?” He then told them about the diary that the first-year students of Class 6 had left behind.

These days, many high schools in even the A-bombed city don’t take time to teach about the atomic bombing, a situation which frustrates teachers who believe in the value of peace education. In a survey the Hiroshima Prefectural Board of Education conducted among 90 high schools in the 60th year of the bombing, only 36 schools provided lessons for this purpose. In a flexible class period, in which peace education can be implemented, preparations for university entrance examinations and job placement, partly due to the desire of parents, have received higher priority.

The nine students commute to school from the suburbs. When they were in elementary school and junior high school, their lessons in peace education invariably concerned Sadako Sasaki, the girl who folded paper cranes while hospitalized with radiation-induced leukemia. Then, by the time they entered junior high, they felt somewhat jaded when the same material was covered in further peace education classes.

First-year student Yuta Shirai, 15, whose grandfather was exposed to the A-bomb, groped for words. “I learned there were students at this school who were killed by the bomb,” he said. “I mustn’t forget them.” Second-year student Aya Matsunaga, 17, remarked, “I thought it was a shame when I saw on TV how some people didn’t even know the date of the bombing.” She added that she was eager to learn more about the history of the Girls’ High School.

At the memorial service, second-year student Mai Tamemasa, 16, will play “Requiem,” a piece composed in the year following the bombing, with her bandmates. “I want to be able to explain about Hiroshima better to people who don’t know much about it,” she said. Her classmates, agreed, nodding to each other, “Yes, I want to learn more.”

On that fateful day, about 7,200 students from 48 schools, junior high through university, were mobilized for the war effort and lost their lives. “We, too, must learn about and pass on our school’s history,” commented Principal Suga, “so our students can appreciate the significance of studying at Minami High School.” This would seem to be a common theme for schools with their own experiences and memories of the atomic bombing.