Are the memories of the atomic bombing really fading from awareness? When bereaved family members of the first-year students of Class 6 from First Hiroshima Prefectural Girls’ High School were located and interviewed, they spoke of the magnitude and the misery of the atomic bombing with emotion that erased the gap of 63 years. Thus, the word “fading” is hardly fitting. Details on the final days of the girls who perished in the bombing while in the area of Koami-cho have been further fleshed out based on witness accounts and materials provided by those who knew them. 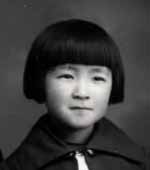 Midori Ugawa (12)
1. Her uncle’s home in Minami-Kanon-machi, Nishi Ward
2. She was transported to Ohno Army Hospital and died there on August 7. Her mother and others came to search for her from the outlying area where the family had evacuated. Her younger brother Takehiko, now 73, who had been evacuated out of the city with a group of smaller children, said, “Before she died, my sister told the hospital staff where my family had relocated. This is how we were able to receive her remains.” 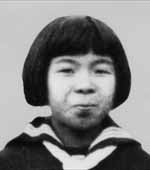 Akiko Okada (13)
1. Kannon-mura, Saeki Ward
2. Her remains were not found. Her cousin Fukie Moriyama, 80, who lived with her, said, “She had been absent from school until the day before the bombing, but that day she wanted to see her friends so she left the house in a gray top and work pants. She dreamed of being a school teacher.” 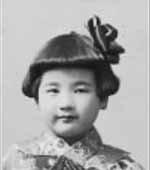 Chie Katakura (13)
1. Furuta-machi, Nishi Ward
2. She returned home with her father Yoshio, 50, who had been at the demolition site in Koami-cho as a member of the Volunteer Corps. She died the next day, on August 7, while uttering the words “I hate America, I hate America.” (Her mother wrote down her last words.) Her father then passed away the following day. Chie’s niece, Keiko Sakai, 60, said, “Since the time my grandmother and mother were living, I have visited the monument for the school on August 6 each year.” 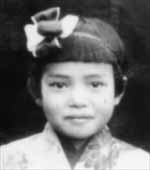 Ritsuko Daido (12)
1. Ochiai-mura, Asakita Ward
2. Her brother brought her back to the house where the family had evacuated to earlier. Her younger sister, Reiko Yamada, 72, said, “She wasn’t burned so severely, but she kept vomiting up a yellowish liquid after she drank water. Her last words were, ‘I can’t see anything.’” 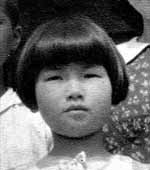 Yukiko Tahira (12)
1. Her sister’s home in Kusatsu-hon-machi, Nishi Ward
2. She died at a house in Koi on August 7. She was identified by the name tag on her clothes. On August 5, she had returned to her parents’ house in Ushita-machi, Higashi Ward. On August 6, she left home for her assigned worksite. Before she left the house, her brother Toshiaki, 76, who stayed home because the factory where he was working was closed that day, advised her not to go. “That wouldn’t be right,” she chided him. 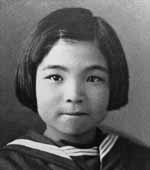 Atsuko Tokuzawa (12)
1. Hatsukaichi-cho (Hatsukaichi City)
2. Her remains were not found. Her younger sister Sachiko, 71, who took over their family temple, said, “My parents found her charred lunch box at the site, but not her body. They went to Ninoshima Island, where many of the injured had been taken, but they didn’t find her. I heard that the day before the bombing she had visited some of our relatives in the countryside and came home late that night, on a horse-drawn cart, so she could go to her worksite the next morning.” 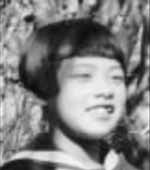 Yoshiko Hayashi (13)
1. Senda-machi, Naka Ward
2. She died at her eldest sister’s home in Kusatsu-machi on August 7. Another older sister, Kimiko Hiyama, 79, who was in her fourth year at Prefectural Girls’ High and was exposed to the bomb in Senda-machi, said, “The next day we went to Koami-cho. Hearing that the first-year students had fled to Koi Elementary School, we crossed a bridge which was near collapse and went to the school. But the injured there were wounded so badly they were beyond recognition. And my sister had been so happy about going to Prefectural Girls’ High School.” 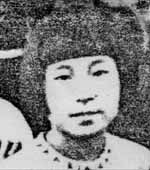 Asako Fujita (13)
1. Jigozen-mura (Hatsukaichi City)
2. Her remains were not found. In April she fled with her family from Osaka to Hiroshima, her mother’s hometown, and entered Prefectural Girl’s High School. Her older brother Shogo, 77, who was a third-year student at Second Middle School and experienced the bombing at his worksite in Minami-Kanon-machi, said, “My mother and I searched for her but could find no trace. We have no idea where she died.” 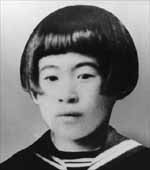 Natsumi Miyamoto (13)
1. Ohno-mura (Hatsukaichi City)
2. On August 7, a relief team found her in a streetcar stopped near the worksite and brought her home, but she died the next day. Her younger sister Motoko, 61, said, “Every year on August 6 I attend the memorial service with my daughter and grandchildren. We offer our prayers and I pray, too, on behalf of my mother, who’s now 99 but still treasures Natsumi’s diary.” Hisako Motokawa (14)
1. Miyauchi-mura (Hatsukaichi City)
2. Her remains were not found. She was born in Cuba, where her parents had emigrated, and came to Japan in 1940. Her older brother Kiyoshi, 79, who was exposed to the bombing at his worksite in Nishi-Tenma-machi, Nishi Ward, said, “She had been absent from school since her enrollment due to a serious illness, but then returned on August 1. On August 6 she left for her worksite, saying, “I’ll do my best today.”

The futures of these girls vanished at the moment a single atomic bomb exploded. “Why did they have to die?” their brothers and sisters wonder. It’s hard to imagine how their families felt, outliving them. Young people today should reflect on this history as if it were their own. If the people now living forget about the bombing, the many dead will be forced to die once more, in memory.
ツイート
Return