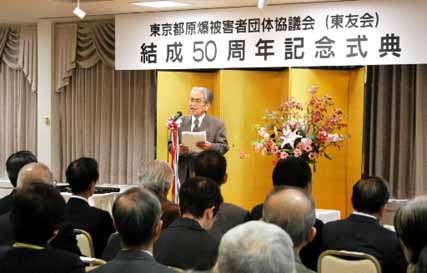 The Tokyo Federation of A-Bomb Sufferers Organizations (Toyukai), an organization of A-bomb survivors (hibakusha) who reside in Tokyo, has observed the 50th anniversary of its founding. For half a century, people who share memories of the bombings of Hiroshima and Nagasaki have supported each other and called for the abolition of nuclear weapons in a city where their existence tends to be forgotten.

The Toyukai slogan is “Those who survived declare that further use of atomic bombs is intolerable.” At the commemorative ceremony for the 50th anniversary held on November 8, Nori Tohei, 80, the vice president of Toyukai, remarked, “All of us, regardless of ideology and belief, have worked together under one common banner: ‘No more hibakusha.’”

The members of Toyukai, taking advantage of their location in the Japanese capital, have been vigorously urging the national government and the Diet to pursue actions to advance the goal of nuclear abolition and establish stronger relief measures for A-bomb survivors. Despite rifts due to ideological differences in the movement opposed to A- and H-bombs, Toyukai has maintained its unity over the years. The organization was established on November 16, 1958 when the membership of 13 existing A-bomb survivors’ groups merged at a gathering held in Tokyo.

In the year before the organization was founded, the Atomic Bomb Medical Law (later, the Atomic Bomb Survivors Relief Law), which stipulated such matters as the right of survivors to receive medical check-ups paid for by the government, was enacted. As a result, organizations of hibakusha with ties to doctors and other medical personnel began springing up throughout Japan to provide health consultation and medical examinations.

Toyukai was launched with the mission of maintaining the health of A-bomb survivors and improving their quality of life while working to realize a peaceful world free of atomic and hydrogen bombs.

Explaining the background behind their abbreviated name--“Toyukai” literally means “Association of Friends in Tokyo”--Mariko Iida, 77, president of the organization, said, “Many people did not want words like ‘atomic bomb’ or ‘bombed’ to be used in our name because that would have exposed their identity as hibakusha when they received mail from us.” This information reveals the fact that A-bomb survivors once suffered from discrimination.

At the beginning, Toyukai faced a number of difficulties. Recalling those early days, Ms. Iida said, “To recruit new members, I would eavesdrop on the conversations in hospital waiting rooms and then disclose that I was an A-bomb survivor or I would take butter to their homes to give them something nutritious.” Back then, too, many hibakusha were burdened by financial hardship and so collecting member fees was problematic.

Still, the members of Toyukai managed to sustain their organization though such means as selling pins in the shape of a paper crane. Then, starting in 1962, the Tokyo Metropolitan Government brought greater stability to the group by commissioning it to provide consultations for hibakusha. Last year, they conducted over 18,000 consultations and helped those survivors who sought to apply for benefits.

Toyukai has also taken the lead in campaigning for improvements to the system used to certify A-bomb diseases by organizing sit-ins in front of the Ministry of Health, Labor and Welfare and other events. Hidenori Yamamoto, 75, vice president of Toyukai, is also the leader of a nationwide group of plaintiffs involved in class action lawsuits over the A-bomb disease certification process. “These lawsuits are a fight to make the national government pay proper attention to the true damage caused by the atomic bombings,” said Mr. Yamamoto. “We hope this fight will help further the aim of nuclear abolition.”

Since 2006, Toyukai has organized a peace walk in October, called “Asakusa Walk,” in cooperation with the victims of the Tokyo air raids of 1945. “Though we are all war victims, this kind of cooperation between different groups has rarely occurred,” commented Mr. Yamamoto. Toyukai’s effort to extend its network beyond the organization’s own work will continue on into the future.