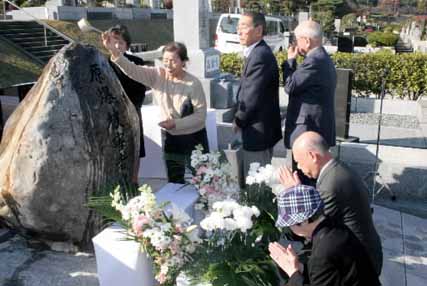 In a cemetery in Hachioji, Tokyo, there is a gravestone with the inscription “Grave for A-bomb Victims.” This shared gravestone was erected in 2005 by volunteers from the Tokyo Federation of A-Bomb Sufferers Organizations (Toyukai) for A-bomb victims and their families who had no close relatives in their hometowns or preferred to be buried in the city to which they had moved.

On November 23, a gathering was held in front of the gravestone to pay respects to the people who were interred there this year. One of them was Aya Oda, who passed away in 1999 at the age of 79.

Ms. Oda lost her fiancee in the war and was living with her mother in Hiroshima when they both encountered the atomic bombing. Her mother died in the bombing but her remains were never found. Later, Ms. Oda moved to Tokyo and regarded a memorial built by Toyukai in a Tokyo temple as her mother’s grave. She hoped to be buried there after her own death, but her wish could not be realized since it was a memorial and not a grave. Originally, then, her ashes were placed in a grave for people who had no kin.

After the shared gravestone was completed, Ms. Oda’s friends gathered donations to transfer her ashes to the new site, and nine years after her death, she was at last laid to rest. Michiko Murata, 57, secretariat chief of Toyukai, helped to coordinate the transfer of Ms. Oda’s ashes. She considered it her “promise to Ms. Oda.” Added Ms. Murata, “Our new promise is eliminating nuclear weapons, which deprived Ms. Oda of her mother and caused her such anguish.”

The bonds formed among the members of Toyukai over the past 50 years are sometimes stronger than kinship. When Ms. Murata took the ashes of an A-bomb survivor who had died alone back to his relatives in Hiroshima, they showed little enthusiasm for receiving the urn. It was this experience that served as the impetus for Ms. Murata’s idea of raising a shared gravestone for such people.

At the same time, the span of 50 years has aged its membership. Mariko Iida, 77, president of Toyukai, is keenly aware of this fact, remarking, “More and more of our consultations involve arrangements for their deaths, such as funerals and organ donations.”

According to the Tokyo Metropolitan Government, there were 7,810 people in the prefecture who hold the Atomic Bomb Survivor’s Certificate as of the end of 2007. Their average age is 74. The number of certificate holders peaked in 1987, when there were 10,365, and since that time has been inexorably declining.

In fact, with memberships falling, several prefectural-based organizations of A-bomb survivors are finding it difficult sustain their activities. The Shiga Prefectural Association for A-bomb Survivors, a member of the Japan Confederation of A- and H-bomb Sufferers Organizations, dissolved this past May. Within Toyukai, a similar situation is occurring in some of its branches in the wards of Tokyo.

This month, Toyukai published a commemorative booklet entitled “Fifty Years of Toyukai.” The booklet looks back on the organization’s history through conversations with its members. On the cover of the booklet is a picture of a boy facing front and gazing out through binoculars. Painter Shoko Nagao, 75, who lost her father in the bombing, created the image.

The booklet was distributed to the participants of the 50th anniversary ceremony on November 8. Minoru Nishino, a board member of Toyukai, stopped short when he saw the picture because it made him feel that “We are being watched by friends who died that day. They are calling for us to abolish nuclear weapons as soon as we can.”

The members of Toyukai may not be the only ones being watched.