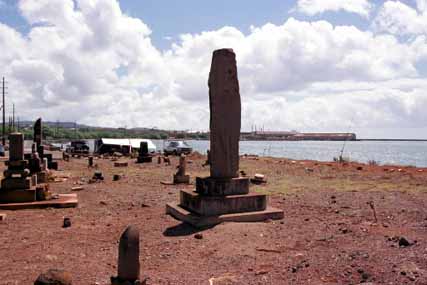 Just after the atomic bombing of Hiroshima, Hawaii native Leslie Nakashima (Japanese name: Satoru Nakashima) entered the city in search of his mother. He conveyed the devastation he saw there to the world on August 27, 1945 in the first news dispatch filed from Hiroshima. The lives of the writer and his family bring into sharp relief the tumultuous history of Japan-U.S. relations.

Mr. Nakashima’s home was the island of Kauai in the western Hawaiian Islands. Rainbows arch across mountain peaks in the bright sunlight in Kauai, where rainfall is the highest in the country. Twice the size of Hiroshima, the island has a population of only 56,000.

An English-language publication commemorating the 50th anniversary of the Foreign Correspondents’ Club of Japan (FCCJ) noted, “Those who rushed down to Hiroshima to file the first report from the atom-bombed city were far too late. The first story had been filed on August 27 by Leslie Nakashima, United Press.” Since receiving a copy two years ago, I have sought out people who might have known Mr. Nakashima.

When I spoke to her, Ms. Tokita said she had only learned of her father’s articles on the atomic bombing at the time of the FCCJ’s 50th anniversary. “When he spoke English Dad was very talkative, but when he spoke Japanese he was very quiet. He wasn’t interested in fame,” she said of her father, who had died 10 years before at the age of 88.

Ms. Tokita brought out letters and other documents in English that had belonged to her father. She was born in Tokyo but had U.S. citizenship until she was in her 20s. Mr. Nakashima’s letters describe his emotions as a Nisei (second-generation Japanese American) caught up in the turmoil of history. Ms. Tokita said she had an uncle still living in Honolulu who should be able to tell me about her father’s days in Hawaii, and she gave me his phone number.

Her uncle, Henry Nakashima, 75, was the youngest of the 11 children in Nakashima’s family. Although he had apologized for his poor Japanese, when I met him I found his Japanese was fluent, and he peppered the conversation with jokes. During World War II he enlisted in the Army and stayed in Japan more than eight years, including a stint in Tokyo with military intelligence as an interpreter, after serving some time in the Philippines.

“Around the time I was born my dad quit his job cutting sugar cane and loading it onto trucks and opened a blacksmith shop. He was good at it, so even white foremen of the sugar cane fields at the other end of the island came to him. My mother, who could understand English, took the orders.”

We left Honolulu and went to Kauai where Mr. Nakashima drove me around, speaking in the intonations of Hiroshima dialect. Both of his parents were from Nihoshima in what is now part of Minami Ward in Hiroshima. They immigrated to this island covered with sugar cane fields.

The name of his mother, Takeno, can be found on a list of immigrants prior to 1900 that is preserved in the Hawaii State Archives. According to the records, she came to Hawaii in 1895 and went to Hanapepe on Kauai to see her father, who had immigrated to Hawaii in 1885. Under an agreement between Japan and the Kingdom of Hawaii, the first boatload of immigrants departed from Yokohama that year. Takeno married Konosuke Nakashima, who was also from Nihoshima. Leslie was born in 1902, their first child.