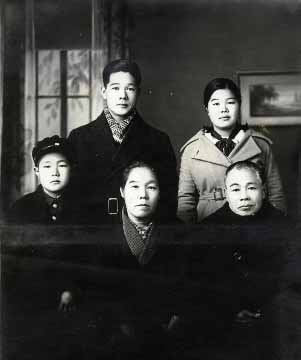 Kauai’s Hanapepe Valley was featured in Steven Spielberg’s film “Jurassic Park” and the deep valley, with its lush green foliage, seems just the sort of place from which dinosaurs might emerge. Leslie Nakashima was born here, where this landscape remains untouched, in 1902.

His brother Henry Nakashima, who was more than 20 years younger than Leslie, said with a wry smile, “Farming is difficult on Kauai, and there were no good jobs. When they grew up, my brothers all asked Leslie for help and left for Honolulu.”

There were eleven children in the family. Looking at the census for 1930, around the time of Henry’s earliest recollections, first- (Issei) and second-generation (Nisei) Japanese-Americans numbered 139,600 and represented 38% of the population of the Territory of Hawaii. (Hawaii became a state in 1959.) One out of three lived in Honolulu, the center of the territory’s government and economy.

Leslie moved to Honolulu as a teenager. While working in variety stores and in the homes of white residents, he attended President William McKinley High School, which was commonly referred to as “the Japanese high school” as most of the Nisei were students there. After graduation he went to work as a reporter for the English-language section of the Nippu Jiji, the oldest Japanese-language newspaper published outside of Japan by Issei. While still in his 20s he moved to the Honolulu Star-Bulletin, a major local newspaper, where he covered a wide range of fields such as government and sports.

The hard work he had done since his youth began to take its toll on Leslie’s father, Konosuke, a blacksmith, and he developed asthma. He was nearly 60. “My parents decided to move back to Hiroshima. They took me and my older sister with them.” Henry, 75, was then 9, and his sister was 15.

That sister, Yaeko Sugawara, now 81, lives in Waimea on Kauai, which is known as the spot where Captain James Cook landed in 1778. Saying, with a laugh, that she had forgotten Japanese, Sugawara spoke with me in a mix of Japanese and English. A graduate of Hiroshima Jogakuin High School, she said, “My parents were no longer working, but they had no trouble getting by in Hiroshima. Leslie sent them money, and during summer vacations he invited us up to Tokyo for sightseeing. He was a good brother.”

After four years at the Star-Bulletin, Leslie followed his parents to Japan. In May 1934, two years after Japan established the puppet state of Manchukuo in Manchuria and Inner Mongolia, he set out for Japan from Honolulu. He wrote about those days: “I first went to the Japan Times because I had come to Tokyo in May 1934 to work on its copy desk through the goodwill of Managing Editor Yoshio Niitobe whom I had met in 1933 on my tour of Japan and Manchuria as a reporter of the Honolulu Star Bulletin.”

Although many Nisei held both U.S. and Japanese citizenship, Leslie went to Japan on his U.S. passport because he had renounced his Japanese citizenship in 1925, the year after the Japanese government unconditionally recognized the right of Nisei to do so. His brother and sister both said Leslie was not typically Japanese in either his thinking or his temperament.

In Japan he received official permission annually from the metropolitan police to remain in the country as an American. Even after marrying Tokyo native Yachiyo in 1938 he retained his U.S. citizenship. Eventually he was driven into a corner as a result.