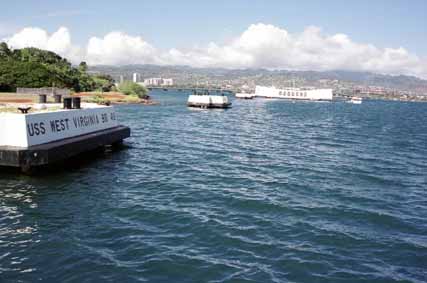 War between the U.S. and Japan

“Tora! Tora! Tora!” These were the code words telegraphed by the first wave of Japanese attackers to indicate that complete surprise had been achieved in the attack on Pearl Harbor, which took place on December 8, 1941, Japan time. Three minutes later at 3:25 a.m., 183 Japanese bombers attacked the ships of the U.S. Navy’s Pacific fleet. At 7 a.m. news of the attack was broadcast on the radio: “The Japanese Imperial Army and Navy has gone to war against England and America in the Western Pacific.”

While the Japanese were filled with excitement and joy, Leslie Nakashima faced a predicament. The Tokyo bureau of United Press, the American wire service where he was employed, had been forced to close immediately, and his home in Shibuya Ward had been searched by the police. Mr. Nakashima was 39 and the father of daughters, aged 2 and 1.

Meanwhile his wife was in a sanatorium. Among the papers in the possession of Mr. Nakashima’s daughter, Kazue Tokita, 61, who lives in Tokyo’s Minato Ward, is a medical certificate showing that tuberculosis was diagnosed in Mr. Nakashima’s wife Yachiyo when she was 25. When the war began, she had been in a sanatorium for seven months. “He must have been at a loss,” Ms. Tokita said of her father.

Mr. Nakashima had to pay for his wife’s treatment and for the support of their children, and he also sent money to his father Konosuke, then 66, and his mother Takeno, 57, who had returned to Hiroshima from Kauai. Apart from his financial worries, as a U.S. citizen, he had come under even closer surveillance by the police and feared arrest.

The Japan Times, where he worked on the copy desk, was subjected to pressure by the police for employing an enemy alien, and in May 1940 Nakashima was forced to quit his job. The closure of the United Press bureau in Tokyo, where he subsequently found work, meant the loss of his job, and the bureau chief, who had been sent to Tokyo from UP’s head office in New York, was detained on the day war was declared.

Mr. Nakashima described his experiences in an essay titled “Reminiscences of our Domei Days.” In that essay the distress he suffered over his family is apparent.

“I learned that Mr. Mutsu was mustering the employment of English-speaking people for Domei’s Kaigai-bu and went to him. He kindly suggested that I might get a job if I applied for Japanese nationality. I then consulted Robert Bellaire, U.P. Tokyo Bureau chief who had been rounded up by police with other American and British foreign correspondents on the morning of Pearl Harbor and taken for internment in Denenchofu…Bellaire said my first concern was my family and advised me not to hesitate applying for Japanese nationality under the circumstances.”

Domei News Agency was established in 1936 with government backing. Its overseas bureaus translated news about Japan into English and broadcast it via its extensive network of radio stations in Asia. Yonosuke Mutsu, 93, who served as bureau chief, interviewed Mr. Nakashima. He described his recollections clearly in the office of a documentary film company he runs in Tokyo’s Chuo Ward.

“I told Leslie he couldn’t do anything without Japanese citizenship. It was a government-backed news agency, and in those days people who sent news overseas were regarded as traitors and spies.” Even Mr. Mutsu, whose grandfather was Munemitsu Mutsu, foreign minister during the Meiji Era (1868-1912), was regarded with suspicion because his mother was British.)

In order to protect his family, in January 1942 Mr. Nakashima applied to the Ministry of the Interior to reinstate his Japanese citizenship, which he had renounced when he was 23. Five months later his request was approved.

Here is a further excerpt from Mr. Nakashima’s account of his days at Domei: “…Mr. Mutsu hired me immediately…I made arrangements to work for Domei in the daytime and the Japan Times at night…I obtained my ‘koseki’ (Japanese nationality) in June 1942 and remember that my wife was relieved she was no longer ‘naisai’ [concubine] to the investigating police but ‘tsuma’ [wife].” Although they had a marriage certificate from the U.S. consulate, the police regarded Nakashima’s wife as his concubine.

There were more than 157,000 Japanese-Americans in Hawaii when it suffered the surprise attack by the Imperial Japanese Army and Navy. In Honolulu, 11 kilometers east of Pearl Harbor, Mr. Nakashima’s younger brother Henry, then 16, was working part-time at a gas station. He and Yaeko had returned to Hawaii from Hiroshima in the spring of 1941.

Recalling the day of the attack on Pearl Harbor, he said, “I went home feeling scared that I’d be mistaken for a Japanese soldier and shot.” Henry, too, had to face hard times.