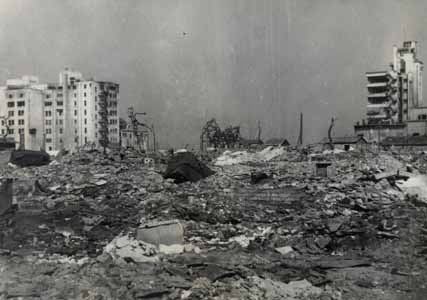 During the war Kazue Tokita, 61, Leslie Nakashima’s daughter, who now lives in Minato Ward in Tokyo, lived with her mother and younger sister in Niho-machi in what is now Minami Ward in Hiroshima. “I think we lived there for about a year,” she said, trying to recall the events of more than 50 years ago.

Ms. Tokita’s mother, who had been in a sanatorium with tuberculosis, was released in the winter of 1943, and continued to rest at their home in Shibuya Ward in Tokyo. As air raids became increasingly intense, her father suggested they go to Hiroshima. Her grandfather had died in July 1944 at the age of 69, and her grandmother was living alone.

“My mother was born in Tokyo and before she got married she worked in Ginza. I remember she wanted to get out of Hiroshima. She complained about mice in the house and things like that,” Ms. Tokita said. So the three of them moved to Nagano Prefecture, where her mother had a friend. It was two weeks before the atomic bomb was dropped on Hiroshima. Her grandmother, Takeno, then 61, stayed behind.

Leslie Nakashima came to Hiroshima 16 days after the bombing to check on his mother, and became the first person to file a report on the devastation there. “I arrived in Hiroshima at 0500 on August 22 to find out about my mother who lived in the outskirts of Hiroshima city… What had been a city of 300,000 population had vanished.”

The article was sent out by the UP wire service on August 27 with a Tokyo dateline, and printed in major U.S. magazines and newspapers, including the August 31 edition of The New York Times. But doubts were raised about the date the story had been transmitted.

Gen. Douglas MacArthur, who commanded the Allied Occupation Forces in Japan, arrived at the U.S. Naval Air Field in Atsugi, Kanagawa Prefecture and moved into Yokohama on the afternoon of August 30. The 112 members of the press corps covering the military had arrived early that morning. Though U.S. battleships entered Sagami Bay for the Japanese surrender on August 27, how was Mr. Nakashima able to file his report?

In memoirs he wrote after his retirement in 1975, he said, “I had a story written of what I had seen in Hiroshima and gave it to a member of the UP war correspondents who swarmed into Tokyo after General MacArthur’s arrival. He took it back to a U.S. warship in Yokohama for transmission to New York.”

In his article he wrote, “…I’m still troubled with a loss of appetite and the least little exertion finds me tired.” It is likely that Mr. Nakashima wrote his story on August 27 in Tokyo while suffering the effects of radiation. It is quite possible that in order to ensure that they were the first to break the story, the UP used that dateline. In any case, it is certain that Mr. Nakashima’s report, in which he wrote, “…people continuing to die daily,” shocked the U.S. The following month when the military team assigned to study the effects of the atomic bombings arrived in Japan, they declared that there were no aftereffects from the radiation.

Mr. Nakashima, asked by UP’s top executive, then returned to work at the Tokyo bureau, which reopened in September in the Mainichi Shimbun building, allowing him to resume reporting in his native language.

His brother Henry Nakashima, 75, who lives in Honolulu, recalled with amusement their reunion. “I arrived in Yokohama two weeks after MacArthur and went to the offices of the UP. When I went up to him, he was so surprised to see me in uniform.”

In 1943 Henry dropped out of President William McKinley High School in Honolulu, which Leslie had attended, and joined the Army after Japanese-Americans were allowed to enlist.

“I had training in the military intelligence service in Minnesota and then was assigned to be a Japanese interpreter,” he said. He learned about the atomic bombings and Japan’s surrender while in Manila. He was eager to be stationed in Japan so he could be reunited with his family.

When he heard from his brother that their mother was safe, he headed for Hiroshima. Henry, who had been brought to Japan from Hawaii by his parents, went to Fujimi-cho in Naka Ward where they had lived when he was a student at Takeya Elementary School. As he showed me those photographs he recalled, “There was absolutely nothing there.” And as his brother Leslie had written in his article, he added, “I was speechless.”