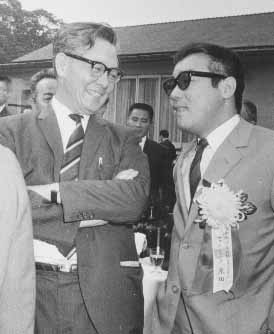 After applying to register as a U.S. citizen at the United States consulate in Yokohama in February of 1946, he was informed by the State Department that he had been “expatriated…by reacquiring Japanese nationality upon his own application.” Although he had been born in Hawaii, the government ruled that he was no longer entitled to American citizenship.

At the time, Japan was under Allied occupation, and, in general, Japanese citizens were not allowed to travel overseas. This meant that Mr. Nakashima could not visit his home in Hawaii. Worst of all, his identity as an American had been totally negated.

In order to regain his citizenship, Mr. Nakashima made use of his professional skills and took action. He sat at his typewriter and composed letters asking for help from the management of UP, where he had returned to work, and from members of the press corps working in Japan. His daughter, Kazue Tokita, 61, who lives in Tokyo’s Minato Ward, has a sheaf of letters her father wrote then.

In them Mr. Nakashima stressed that he did not “swear allegiance to the emperor,” and wrote about his apprehension at the prospect of being arrested. “I feared that once I was detained there was no telling what might happen and there would have been no one to provide for my family.” Mr. Nakashima wrote that he had been exposed to “extreme duress,” which had ultimately led to his decision to take Japanese citizenship.

He also complained of what he felt was unjust treatment. “…it seems grossly unfair when hundreds of Nisei who demurred against expatriating themselves from Japanese nationality while living in the United States, came to Japan and were content to live here as Japanese before and after Pearl Harbor, are being recognized as American citizens by the State Department.” He also noted that his two daughters had been recognized as citizens by the American consulate and that he hoped to take them back to Hawaii.

Ms. Tokita, who studied in the U.S. after graduating from high school, said, “My father felt he was an American. Although he was born in the Meiji Period, even at home his behavior wasn’t typical of a Japanese man of that era.” She recalled that her father didn’t expect to be waited on and made an American-style breakfast of bacon and eggs for himself. “And he never could eat ‘natto’ (fermented soybeans),” she added with a laugh.

Looking back through his letters, it appears the president of UP and others wrote to the State Department on Mr. Nakashima’s behalf asking the department to reconsider its decision. But, although there may have been special circumstances in his case, it was difficult to prize open the door to citizenship, the legal status that forms the foundation of a multi-ethnic nation. Ultimately, in 1956, Mr. Nakashima acceded to the State Department’s view on the matter.

Hiroshi Inoshita, 85, who lives in Tokyo’s Shibuya Ward, conjectured about what may have gone through the mind of his former colleague. “In my case, during the war I took Japanese citizenship based on my own beliefs and went to work in Domei’s Shanghai bureau. If Leslie had made his decision of his own free will, I think he would have thought the government’s decision was fair. But he felt it was unfair, so he couldn’t accept it.”

Mr. Inoshita, a native of California, came to Japan in 1936 and worked with Mr. Nakashima at UP’s Tokyo bureau after the war. While writing for the book commemorating the 50th anniversary of the Foreign Correspondents’ Club of Japan that was published in 1998, Mr. Inoshita noted that Mr. Nakashima had filed the first report from Hiroshima.

“As a Nisei myself, it seems to me that Leslie had a strong sense of himself as an American. He was very open, like the people of Hawaii. He was talkative and spoke in a loud voice,” Mr. Inoshita said. He also recalled that Mr. Nakashima covered sports events in Asia.

Mr. Nakashima abandoned his effort to regain his U.S. citizenship, and in 1956 he went to Melbourne on a Japanese passport to cover the Olympic Games. He visited Hiroshima nearly every year and reported on the city’s recovery after the atomic bombing.

In 1960, 25 years after the bombing, he noted that Hiroshima’s population was more than 400,000 and the city had “well-planned streets more than 100 feet wide” and “ferro-concrete buildings.” He concluded his report by saying, “But the old city will not be forgotten; nor will the tragedy that made a new one necessary.”