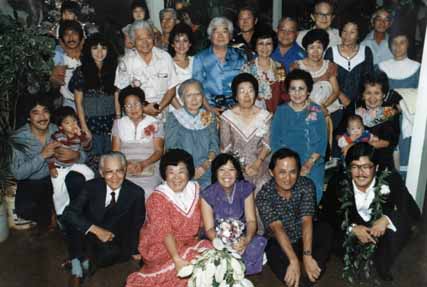 Henry, 75, who lives in Honolulu, added, “When I was in Tokyo as an interpreter with the military intelligence service, if he had said something to me I might have been able to get some help for him from the Army. I wonder why he never said anything.”

After his discharge in 1947, Henry returned to Honolulu, married Jane Murata, and worked for the municipal bus company for 41 years. During that time he and Jane traveled to Japan, and on several occasions Leslie came to Hawaii, where his mother also lived.

Takeno had continued to live alone in her home in Niho-machi, in what is now Minami Ward in Hiroshima, after the atomic bombing, but she spent the last years of her life on Kauai living peacefully with her eldest daughter and her daughter’s husband, who ran a pineapple grove.

“Mom died in 1967 right after Leslie went to see her when he was in Hawaii for a visit. Everyone said she must have been at peace after she saw him,” Henry said. She was 83. Leslie came to Hawaii to get her ashes to bring them back to Japan.

In later years, when Henry saw his brother in Tokyo or Honolulu, their favorite topic of conversation was golf, a sport they both loved to play.

After he was stationed in Japan, Henry learned that his brother had gone to Hiroshima 16 days after the atomic bombing in search of their mother. Two years ago, Leslie’s daughter, Kazue Tokita, 61, who lives in Tokyo’s Minato Ward, sent Henry a copy of a book commemorating the 50th anniversary of the Foreign Correspondents’ Club of Japan, which mentioned Leslie being the first to file a report on the devastation there. Henry said it was then that he learned about Leslie’s reports from Hiroshima.

After the death of her mother Yachiyo at 83 in June 1999, Ms. Tokita learned from Henry, who had come to Japan to visit his family’s gravesite, that her father had married in Hawaii but the couple had divorced over a difference of opinion on going to Japan. She recalled that her father often said, “I love my family.” Ms. Tokita said her father had always shown affection to her younger sister who was handicapped and who died young. “He never complained,” she said. “He was an optimistic person who always looked ahead.”

How did Leslie feel about the dropping of the atomic bomb on Hiroshima? Ms. Tokita once asked him. He replied, “It had to be done in order to hasten the end of the war.”

According to his daughter, Leslie “did not look at things from Japan’s perspective.” When war broke out between the U.S. and Japan, he was regarded as an enemy alien in Japan, and after the war he was denied the opportunity to regain his U.S. citizenship. These wartime hardships were surely a vexing experience.

I asked Henry the same question about the atomic bombing. “If Japan’s surrender had been delayed, I would have participated in the invasion of Kyushu, and who knows what would have happened. I think the bomb was dropped to end the war,” he said. But his view differs from the general view in the U.S. that Japan’s attack on Pearl Harbor led to the atomic bombings. He believes that the war itself led to the development of atrocious weapons and to their use.

Leslie continued writing articles for the United Press, which became United Press International, as a special correspondent in Tokyo until he was 73. After his retirement he enjoyed playing golf and poker until he became bedridden when he was 83. He spent the last years of his life in a hospital in Iwaki, Fukushima Prefecture, where his son-in-law was a doctor. He died there in 1990 at the age of 88. Strangely enough, Leslie Nakashima died on Pearl Harbor Day.

Said Ms. Tokita, “It seemed to symbolize my father’s life.”