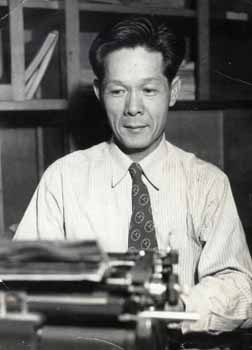 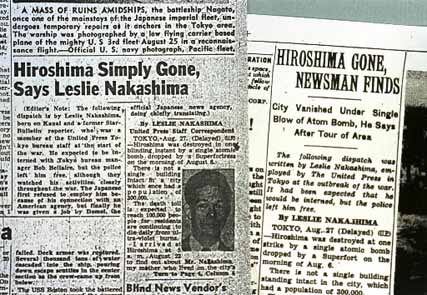 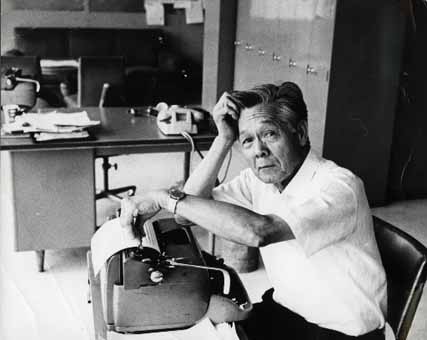 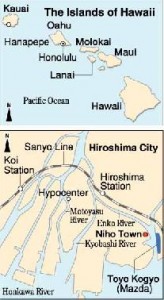 The first news dispatch on the devastation of Hiroshima by the atomic bomb was filed by Hawaii native Leslie Nakashima (Japanese name: Satoru Nakashima), a Japanese-American. Various records and the accounts of those who knew him reveal that Mr. Nakashima filed his report via the United Press news agency on August 27, 1945. His article was printed in the New York Times on August 31 and in other publications. For many years the first report sent overseas from Hiroshima was believed to have been that of Wilfred Burchett, a correspondent for a British newspaper, but his report was filed eight days later.

Mr. Nakashima entered Hiroshima on August 22, 16 days after the dropping of the bomb. In his article he wrote that “what had been a city of 300,000 population had vanished.” His account described the devastation of Hiroshima and the suffering of its citizens that he observed as he walked around the city. He also wrote of “people continuing to die daily from burns suffered from the bomb’s ultra-violet rays,” making him the first to point out the serious aftereffects of radiation, which were denied by a U.S. military investigation team at a press conference in Tokyo the following month. Mr. Nakashima also noted that there were many civilian victims, including the mobilized students who were killed while demolishing buildings. “Thousands of middle school boys and girls were accordingly victims and the number of those missing is astounding,” he wrote.

Mr. Nakashima asked a UP reporter aboard a U.S. battleship deployed to Japan to file his dispatch, and an abridged version was printed in the New York Times on August 31 under the headline “Hiroshima Gone.” Excerpts of his report were also published in the August 30 edition of the Honolulu Star-Bulletin along with a head shot of Mr. Nakashima. The September 10 edition of Time magazine also noted that Mr. Nakashima had filed the first report from Hiroshima. In this way the public initially learned of the devastation via major U.S. news outlets.

Leslie Nakashima’s parents were natives of Hiroshima City who immigrated to Kauai, Hawaii where Mr. Nakashima was born in 1902. After working as a reporter for a local newspaper, he came to Japan in 1934. He worked on the copy desk for an English-language newspaper in Tokyo, but because he was a U.S. citizen he was forced to quit his job in 1940 and subsequently went to work at UP’s Tokyo bureau as a reporter. He remained there until war with the U.S. broke out after Japan’s attack on Pearl Harbor on December 8, 1941 (Japan time).

Mr. Nakashima entered Hiroshima just after the bombing to search for his mother Takeno, who was living in Niho-machi, now part of Minami Ward, after returning to Japan from Kauai.

Historical records kept by both Hiroshima Prefecture and the city state that the first reports from Hiroshima were filed with the London Daily Express by Mr. Burchett, an Australian. Mr. Burchett entered Hiroshima on September 3 and filed his report the following day. His article appeared in the Daily Express on September 5. The headline read “The Atomic Plague: ‘I write this as a warning to the world.’” In the article Mr. Burchett angrily described the devastation caused by the bombing.

How did the factual error regarding the first report filed from Hiroshima gain credence? In its August 1954 edition, Sekai [World] magazine introduced an article by Mr. Burchett by stating that he “arrived in Hiroshima alone and filed the first report describing the destruction of the atomic bombing” and also noted that he had “called on the entire world” to recognize the horrors of the atomic bomb. “Gensuibaku jidai: Gendaishi no shogen” [The Era of A- and H-Bombs: A Witness to the Contemporary History] written by Seiji Imahori, a professor at Hiroshima University, was published in 1959. This book, which became a classic work on the atomic bombs, included a lengthy account of Mr. Burchett’s reporting, and the expression “No More Hiroshimas,” which does not appear in Mr. Burchett’s article, was attributed to him. Based on this, subsequent research papers, newspapers, and television programs stated that Mr. Burchett had filed the first report from Hiroshima.

Mr. Nakashima returned to work at UP’s Tokyo bureau when it reopened after the war and remained there as a reporter until his retirement in 1975. He died in 1990 at the age of 88.

His entire article was reproduced in “20 Years of History: 1945-1965,” a publication commemorating the 20th anniversary of the founding of the Foreign Correspondents’ Club of Japan.

Click here to read the first news dispatch from Hiroshima after the atomic bombing.


Click on the photos below to enlarge the images and read the captions in a larger font.
ツイート
Return