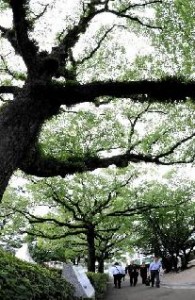 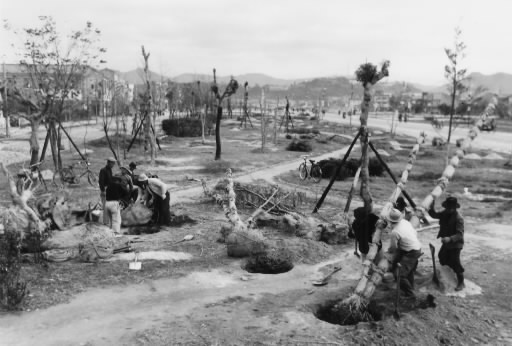 This year marks the 60th anniversary of the Hiroshima Peace Memorial City Construction Law, established in 1949 to serve as the basis for reconstructing the city of Hiroshima, which had been devastated by the atomic bombing. The law seeks to "embody the ideal of striving to realize a lasting peace in the world." The development of the city's infrastructure was supported by the special funding provided by this law and property previously belonging to the military was granted to the city by the Japanese government without cost. The ideal of striving for peace has even formed a direction for construction projects. In this series, the Chugoku Shimbun will look at "symbols of reconstruction" in the city, projects which have been shaped by the Hiroshima Peace Memorial City Construction Law.

Gazing up Peace Boulevard, southeast of Hiroshima Peace Memorial Park, green leaves can be seen far into the distance. The leaves are found on camphor trees that were planted at roughly 10-meter intervals. With the branches of the trees stretching out and reaching one another, the branches have come to form a natural covering that blocks the intense sunshine of summer.

In response to the "Tree-planting Campaign" launched in 1957 and 1958, nearly 6,000 trees were provided for the park environs from various parts of Hiroshima Prefecture. According to the Urban Development Bureau, "The donated trees were cut to the same height of six meters so they could be easily transported. After planting, the trunks of the trees haven't grown as vigorously as the branches, which grow out horizontally." The very shape of the trees thus reflects the history of the city's reconstruction.

The problem is that the stand of trees, which extends east and west for nearly 3.5 kilometers, is dwindling. According to research conducted by the "Association of Trees on Peace Boulevard," the trees are disappearing due to damage brought on by blight, termites, and typhoons. Twenty-five years ago there were about 200 types of trees, but the number has declined to about 170. Moreover, only about 2,000 trees are taller than three meters.

"Trees are a symbol of the goodwill shown to Hiroshima," said Atsushi Rokujubu, 66, a member of the association. "We should preserve them and nurture them." The association continues to check the trees once a month.

After leaving Peace Memorial Museum, people quickly come into contact with the trees. In the wake of the atomic bombing, it was said that "nothing would grow in Hiroshima for 75 years." In this light, the green of the trees appears even more verdant.

Historical Note
In 1957, the City of Hiroshima appealed for trees to make the city "a peaceful place filled with everlasting greenery." Peace Boulevard, with its approximately 6,000 trees, including camphor trees and round leaf hollies, has become a symbol of the peaceful ideal of the Peace Memorial City.