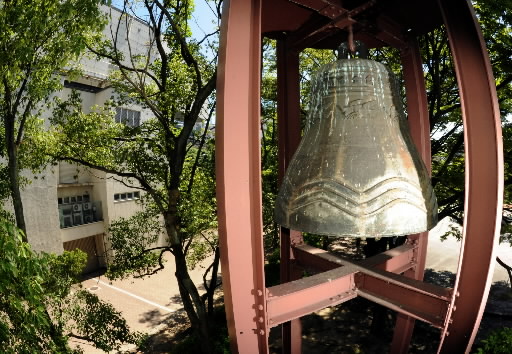 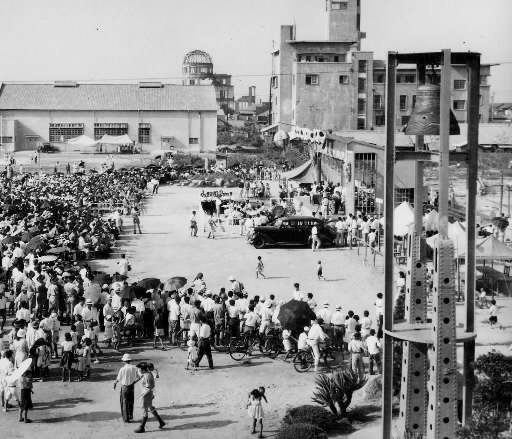 The buzz of cicadas stirs the air. Children, with shouts of delight, dash to the Chuo Park Family Pool in downtown Hiroshima. Nearby stands a bell tower quietly gazing down on the children from amid a stand of trees.

The bell tower is nine meters tall and looms on the northeast corner of the Hiroshima Youth Center. In the tower hangs a bell measuring 1.4 meters high and 1.2 meters across, fashioned in a western style. A pattern of doves and the phrase "No More Hiroshimas," in English, are engraved on the surface of the bell.

"Sure, I've noticed that bell hanging there, but I don't know anything about the history behind it," said a sanitation worker in the park. His colleagues shared this sentiment. The forgotten Peace Bell was produced by Hiroshima metal manufacturers in 1949 to commemorate the passage of the Hiroshima Peace Memorial City Construction Law in both houses of the Diet. The bell was tolled at the third Peace Memorial Ceremony held at present-day Chuo Park on August 6, 1949.

However, the venue for the memorial ceremony was moved to Peace Memorial Park the following year and the bell was never rung again.

Standing nearby is the former Hiroshima Municipal Baseball Stadium, which will end its long service to the city in October. The question of how the site will be utilized after the stadium is demolished has been a subject of discussion lately. The bell is a factor in this plan but its fate has not yet been decided. "The bell tower stands in an area which will be renovated to become a plaza," an official of the Hiroshima City Urban Center Redevelopment Department explained. "We may have to think about moving the tower."

Tomoko Ishida, 80, a Hiroshima resident, is the younger sister of the late Yonekichi Matsumura who led the effort by the metal manufacturers to produce the bell. He passed away in 1993. "Sixty years ago, the bell rang with a high, clear tone. The sound reflected the passion for peace held by my brother and his friends," said Ms. Ishida, longing for the day the forgotten bell is rung again.

Historical Note
Since the first Peace Memorial Ceremony in August 1947, the Peace Bell has tolled at every ceremony. The bell that the Hiroshima Copper Alloy Cast Association produced in 1949 was used only once in the year the ceremony was held in Chuo Park. The bell was cast using metals collected in the aftermath of the atomic bombing.