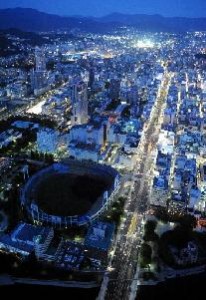 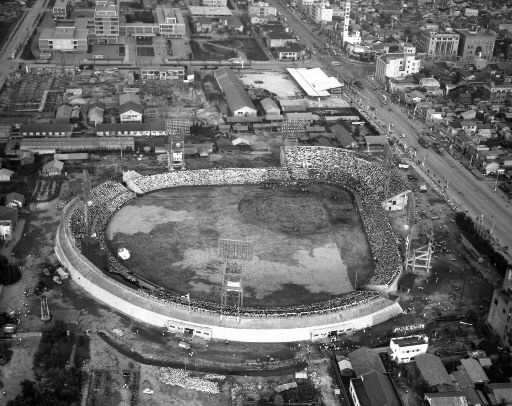 Article 6 of the Hiroshima Peace Memorial City Construction Law stipulates that "The mayor of Hiroshima shall, with the cooperation of the residents and support from relevant organizations, establish a program of continuous activity toward completion of the Hiroshima Peace Memorial City." The old stadium, completed in 1957 with backing from local financial circles, is a prime example of actualizing the law's aim.

For 51 years, the stadium served as the home of the local pro baseball team, the Hiroshima Carp, and attracted lively crowds. The Atomic Bomb Dome, a World Heritage site and a place to pray for peace and the repose of the A-bomb victims, stands across Aioi Street from the ballpark. These two landmarks provide a telling contrast, sharply revealing the post-war progress of the A-bombed city.

This is one reason the planning for the site's effective use, after the old stadium is demolished, has not gone smoothly. The city assembly has been opposed to the city administration's plan to build a facility to display the scores of folded paper cranes that make their way to Hiroshima each year. Members of the assembly argue that using part of the site for this purpose would undercut its attraction for the general public.

At the old stadium, Masami Sakamoto, 81, a former Japan National Railway employee and a resident of Fuchu-cho, Hiroshima Prefecture, watched the Hiroshima district qualifying games of the National High School Baseball Tournament. "The old ballpark will always be alive in the memories of my life," he said. "I hope the site will continue to be a place that brings vitality to the city."

Historical Note
The old Hiroshima Municipal Stadium was completed on July 22, 1957. Some 160 million yen in donations by ten local businesses supported its construction. Until the end of World War II, the West Military Drill Ground was located at this site. With the passage of the Hiroshima Peace Memorial City Construction Law, the stadium was built as a feature of Hiroshima City Chuo Park. It was also used as a venue for such events as the Hiroshima A-bomb Memorial Bon Dance, the World Conference Against A & H Bombs, and various concerts.