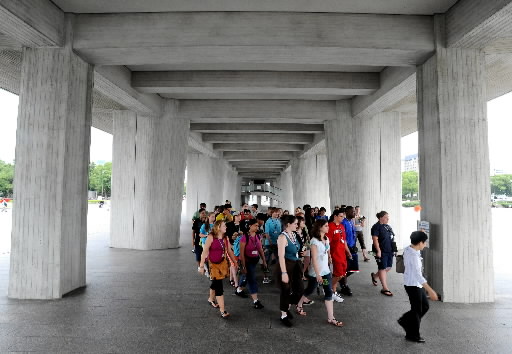 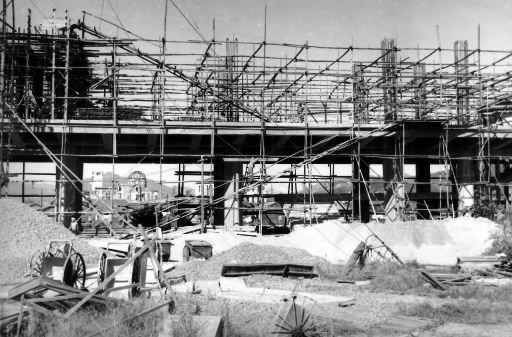 The main building of Peace Memorial Museum is supported by 20 columns. The open space beneath the building, created by the raised floor, is six meters high and serves as a gathering spot. This ground level space not only provides some pleasant shade in mid-summer, it offers a splendid view of the Cenotaph for the A-bomb Victims and the Atomic Bomb Dome, a World Heritage site about 500 meters ahead, standing along a straight line. The late Kenzo Tange, the architect who designed Peace Memorial Park, conceived this arrangement.

In designing Peace Memorial Museum, Mr. Tange felt that the image of the building "must embody the power of rising from the rubble in the aftermath of the atomic bombing." He also incorporated the idea of a "gate" from which to enter the park from Peace Boulevard to the south.

Peace Memorial Park was created as an expression of the ideal championed by the Hiroshima Peace Memorial City Construction Law: the sincere pursuit of lasting peace in the world. After the park was developed in 1954, the museum was established the following year, in 1955.

In the beginning, the museum simply served to display such materials as tattered clothing and misshapen roof tiles, along with photo panels, to convey the devastation wrought by the atomic bombing. However, the museum began to adopt another function as well. It now also acts as a site for "peace education" where the history of Hiroshima, including its identity as a military city before the atomic bombing and its reconstruction efforts, as well as nuclear issues, are discussed.

About 1.36 million people visited the museum in fiscal 2008. This is a six-fold increase from the roughly 230,000 visitors in fiscal 1956, one year after it opened. Last fiscal year, about 180,000 foreign nationals visited the museum, accounting for 13 percent of the total. Compared to the roughly 50,000 visitors from overseas 38 years ago, when the City of Hiroshima began compiling such statistics, this is well over a three-fold increase.

"If everyone in the world could touch the horrific nature of the atomic bombing firsthand, they would surely unite to eliminate nuclear weapons," stressed a high school student visiting the museum from New York.

Historical Note
The design for Peace Memorial Park and Peace Memorial Museum, selected in a design competition, was conceived by Kenzo Tange, an associate professor at Tokyo University at the time, and his associates. The main building of the museum was constructed in 1955. It is a two-story structure, with a partial third floor, and encompasses 1,600 square meters. The east building of the museum was constructed in 1994 and consists of three floors, along with a basement. The east building totals 10,300 square meters.