Nuclear weapons can be eliminated: Report from Niigata, Part 3 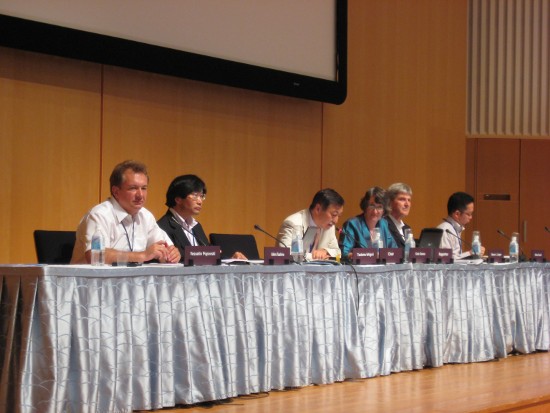 On August 28, the 21st United Nations Conference on Disarmament Issues, held in the city of Niigata, closed its gathering. Taijiro Kimura, director of the United Nations Regional Center for Peace and Disarmament in Asia and the Pacific, which organized the conference, looked back on the three days of discussions at the conference and said, “I sensed the unanimous agreement of the participants to make a success of the Nuclear Non-proliferation Treaty (NPT) Review Conference next May.”

Since U.S. President Barack Obama’s speech in Prague this past April, a positive atmosphere for nuclear disarmament has prevailed. The remaining challenges facing the international community for next spring are to resolve various concerns, one by one, and determine how to implement concrete approaches toward nuclear disarmament and abolition.

In this Niigata conference, Khaled AbdelHamid, special assistant to the executive-secretary of the Preparatory Commission for the Comprehensive Nuclear-Test-Ban Treaty Organization, noted at a session exploring the prospects for the Comprehensive Test Ban Treaty (CTBT) that progress in the implementation of the CTBT is critically important for the NPT Review Conference next spring. His remarks pressed the U.S. and Chinese participants at the session to ratify the CTBT in their nations.

What kind of agreement will be possible at next year’s NPT Review Conference as the NPT member nations overcome conflicts of interest between nations? Libran Cabactulan, president-elect of the conference and a senior diplomat of the Philippines, spoke about the need for leadership and said that political will, flexibility, and forward-looking compromises on the part of the NPT signatories would be indispensable. He also added that initiatives by civil societies would be important.

Some voiced approval of the remarks made by Mr. Cabactulan. Boniface Guwa Chidyausiku, Zimbabwe’s ambassador to the U.N. and chair of the Preparatory Committee (PrepCom) for the 2010 NPT Review Conference this May, which has produced groundbreaking results, including the agreement on the agenda of the NPT Review Conference, said there was something citizens could do: We can call on the candidates running in our constituencies for efforts toward nuclear disarmament and non-proliferation and cast a ballot for politicians who will respond to our calls.

Vesselin Popovski, senior academic program officer at the United Nations University in Tokyo, stressed that he hoped for President Obama’s visit to Hiroshima as no other place but Hiroshima would make “the president’s speech in Prague” more persuasive.

It is citizens, or eligible voters, who press politicians for their leadership. Hiroshima and Nagasaki have the power to combine the calls of citizens and create a groundswell. Here is an opportunity for the A-bombed cities to provide their centripetal force for next spring.