Nuclear weapons can be eliminated: Diplomacy, security and the new Japanese government, Part 2 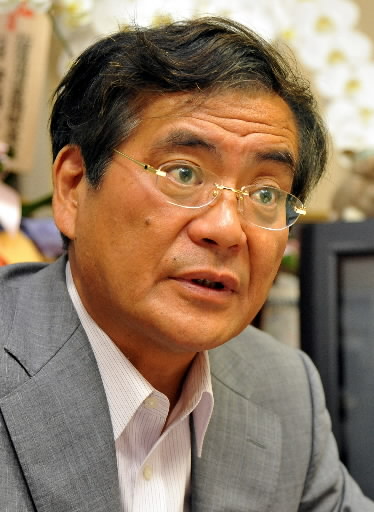 In Part 2 of this series of interviews with experts and politicians on the incoming Japanese administration, the Chugoku Shimbun speaks with Yoshio Hachiro of the Democratic Party of Japan (DPJ), a member of the House of Representatives.

How will the DPJ, now forming a new administration, plan to "lead the world toward the abolition of nuclear weapons"?
As an A-bombed nation, we will make steady efforts in persuading nuclear weapons states to promote nuclear disarmament and eliminate their nuclear weapons. We need to have state leaders understand, including those of the countries which seek to possess nuclear arms, that nuclear weapons have the potential to annihilate the entire human race.

Japan has to take the leadership in providing an international forum where the importance of nuclear abolition can be advocated. U.S. President Barack Obama has also proposed an international conference on nuclear security. I believe that the gathering of the United Nations General Assembly can be an important occasion to make our appeal.

Are you suggesting that information on the damage wrought by the atomic bombings be disseminated through diplomatic channels?
We would like to put a high priority on keeping close ties with the A-bombed cities of Hiroshima and Nagasaki. Merely thinking about nuclear weapons as an abstraction is not enough to understand their true nature. Japan has a responsibility to let the world know about the long-lasting aftereffects of radiation. Japanese governments in the past did not seem to take the initiative to do so.

Do you think the government's policy, through successive administrations, of relying on the U.S. nuclear umbrella in spite of the fact that we are the nation which experienced the atomic bombings, should be changed?
At this point, it’s difficult to say whether the U.S. nuclear deterrent is necessary or not when, even in Asia, there are nuclear weapon states. Still, we have to move in the direction of not continuing to rely on nuclear deterrence, with our eyes firmly fixed on the elimination of nuclear weapons. The tendency to call on the U.S. nuclear umbrella to assure our security every time North Korea conducts a nuclear test must be changed.

The talk of forming a coalition government with the Social Democratic Party and the People’s Party is now in its final stage. The diplomatic skills of the Japanese government will soon be tested with regard to how the nation should respond to the growing global awareness for the abolition of nuclear weapons. As for the three non-nuclear principles, we will make a decision, as an A-bombed nation, on whether we should enshrine them into law, taking current conditions into consideration.

What specific plans do you have in this area?
The vision exists for a North East Asia Nuclear-Weapon-Free Zone treaty. The idea of this treaty is for North Korea, South Korea and Japan to become a nuclear-weapon-free zone and the United States, China and Russia, all of which are nuclear weapons states, to endorse it. Many nuclear-free-zone treaties have already come into effect around the world. We plan to persuade North Korea to join this effort and explore the necessary steps to realize such a treaty.

How will you persuade North Korea?
We don’t even know whether North Korea has already armed their missiles with nuclear warheads and is prepared to launch them. As long as we find ourselves in this uncertain situation, we should not approve an attitude which considers North Korea a threat and might lead to a preemptive military strike against that nation.

The key is how to bring North Korea back to the table for international negotiations. The dialogue between Japan and North Korea will play an important role, too. Then we will be able to seek solutions for the abduction issue and possibilities will open up for economic cooperation, normalization of relations and the denuclearization of Northeast Asia.

Yoshio Hachiro
Yoshio Hachiro was born in Hokkaido in 1948 and is a graduate of Hokkaido University. Mr. Hachiro has been elected to the House of Representatives seven times since 1990. As a member of the DPJ, he has assumed several positions including Diet Affairs Committee Chair and Election Campaign Chair.