Nuclear weapons can be eliminated: Diplomacy, security and the new Japanese government, Part 3 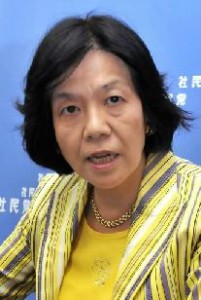 In Part 3 of this series of interviews with experts and politicians on the incoming Japanese administration, the Chugoku Shimbun speaks with Tomoko Abe, chairperson of the policy board of the Social Democratic Party (SDP).

What was the main thrust of your argument with regard to diplomacy and security in the discussions involving the formation of a coalition government with the Democratic Party of Japan and the People's Party?
"Paradigm shift" is our watchword. That is, our way of thinking must change drastically. We now face the challenge of transforming our national security without relying on nuclear weapons. It is high time for Japan, a nation that has experienced nuclear attack, to act. The three parties of the coalition consider the abolition of nuclear weapons to be a cornerstone of our common agenda.

What are your specific plans?
Japan will play a proactive role with regard to three treaties. Namely, we will work for an early entry into force of the Comprehensive Test Ban Treaty (CTBT), an early realization of a fissile material cut-off treaty, and we will pursue a leading role at the Nuclear Non-proliferation Treaty (NPT) Review Conference to be held next spring.

The Social Democratic Party will urge nuclear weapon states such as the United States and Russia to adopt a "no first use" policy in regard to nuclear arms and make proactive efforts to create a nuclear-weapon-free zone in Northeast Asia.

Are adhering to the three non-nuclear principles and enshrining them into law also key principles?
Protecting the three non-nuclear principles is not enough. Japan has had an unblemished record in its peaceful use of nuclear energy, but since we possess a large amount of plutonium, our neighbors are wary that we might arm ourselves with nuclear weapons. We have to take proper actions to allay this suspicion.

For this, harmful slips of the tongue made by politicians must be curbed. Those verbal gaffes are very damaging in diplomacy. As for negotiations with the United States, which provides us with its "nuclear umbrella," satisfactory communication is an issue of high priority. Deep down, the U.S. is also suspicious of Japan. Japanese ministers have to convey the view of the A-bombed nation to them directly, instead of leaving the matter to bureaucrats at the Ministry of Foreign Affairs.

What view should be conveyed and what action should Japan take?
Even little by little, we need to become less dependent on nuclear deterrence. As part of this effort, it is important to let the world know why Japan has been appealing for denuclearization. We should invite politicians from the Untied States and other countries to the A-bombed cities of Hiroshima and Nagasaki and share with them the horrific reality that the bombings brought about. On another front, it’s vital to form a consensus among the citizens of Japan for the abortion of nuclear weapons.

What are the prospects for diplomacy in Asia, including North Korea?
The channel for dialogue in the form of the six-party talks has become quite weak. The key to dealing with North Korea is humanitarian support, and I believe that assistance for food shortages and A-bomb survivors living in the country as well as medical aid for children could provide a breakthrough. It is also important to collaborate with China. The flow of people and goods will bring along information and lay a foundation for solving the issues of abductions and nuclear weapons.

Everything comes down to diplomacy. It's time for the Japanese government to set out concrete plans to move forward in resolving these matters concerning North Korea.

Tomoko Abe
Born in Tokyo in 1948, Ms. Abe graduated from the Faculty of Medicine at the University of Tokyo. A pediatrician, she has been elected to the House of Representatives four times since 2000. She has been the chairperson of the SDP policy board since 2003 as well as a member of Parliamentarians for Nuclear Non-proliferation and Disarmament (PNND), a global network of parliamentarians.