Nuclear weapons can be eliminated: Diplomacy, security and the new Japanese government, Part 4 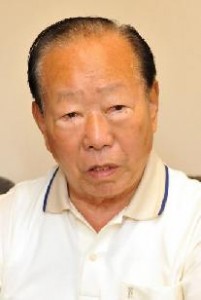 In Part 4 of this series of interviews with experts and politicians on the incoming Japanese administration, the Chugoku Shimbun speaks with Saburo Yamashita, an A-bomb survivor and former vice president of the National Council of Japan Nuclear Free Local Authorities.

What are your expectations for the new Japanese administration?
With the emergence of U.S. President Barack Obama, who has advocated "a world without nuclear weapons," the movement for peace and nuclear abolition has grown worldwide. The manifesto by the Democratic Party of Japan (DPJ) also indicates support for the abolition of nuclear weapons. The government of the A-bombed nation of Japan should ride this international wave and take action.

National security means protecting the safety of the people within a nation. Some people may think that Japan should counter North Korea’s nuclear tests and missile launches with military measures. But this is misguided. Despite the difficulty, Japan should pursue diplomacy by joining hands with other nations.

What do you mean "to ride this international wave"?
I mean conveying the reality of the damage wrought by the atomic bombings. At the Nuclear Non-proliferation Treaty (NPT) Review Conference in 2005, held in the United States, I related my experience of the bombing and my talk was met with applause. I realized I could communicate the horror of nuclear weapons.

I think it’s also important to urge President Obama and other leaders to visit Hiroshima. Unless political leaders believe that nuclear weapons are unnecessary, nuclear abolition cannot be achieved. This is a crucial step in advancing the campaign for abolition.

What sort of appeal should the A-bombed cities make to the Japanese government?
The Japanese people want to live in peace. Though the central government has sole authority in terms of the nation's security and foreign policies, it's vital for local governments and citizens to examine these policies.

Globally, the number of member cities of Mayors for Peace, a campaign led by Hiroshima and Nagasaki, has topped 3,000. But there aren't so many member cities in Asia, including China and South Korea. This is probably due to differences of historical outlook and issues involving compensation after the war. For the region, though, I think that true solidarity and successful diplomacy is possible if these matters are resolved, even very gradually, helped by the wisdom of local municipalities.

The DPJ, the Social Democratic Party and the People's New Party have come to a consensus, as a coalition, to review the current situation and future of the U.S. forces in Japan. What sort of approach would you like them to take?
When I was mayor of Hatsukaichi, I stood up to oppose the military build-up of the U.S. Marine Corps Air Station in Iwakuni, Yamaguchi Prefecture. When other nations are viewed as potential enemies, the build-up and realignment of military forces comes into play. These other nations continue to take a hostile stance, too. And the existence of nuclear weapons behind the scenes just adds fuel to this fire.

Sixty-four years have passed since the war and it's time to change our way of thinking. Instead of trying to increase our military might, we should pursue security that doesn't rely on armed force. I know this is a difficult task, but there have been changes in the administrations of both the United States and Japan. As an atomic bomb survivor, I hope their policies will change, too, and that the Japanese government will take a firm stance in opposing nuclear weapons.

Saburo Yamashita
At the age of 15, Mr. Yamashita experienced the atomic bombing of Hiroshima while at a factory in Nishi Ward, where he was working as a mobilized student. In 1955, he was first elected to a village council in former Miyauchi Village (now, Hatsukaichi City). After seats on the town and city councils, he served as mayor of Hatsukaichi for four terms from the year 1991, a total of 16 years. From 2000, he was also the vice president of the National Council of Japan Nuclear Free Local Authorities for seven years. Mr. Yamashita is now 79 years old.