Nuclear weapons can be eliminated: Diplomacy, security and the new Japanese government, Part 6 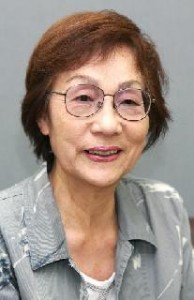 In Part 6 of this series of interviews with experts and politicians on the incoming Japanese administration, the Chugoku Shimbun speaks with Emiko Okada, an atomic bomb survivor and a Hiroshima Peace Volunteer at Hiroshima Peace Memorial Museum.

What are your hopes for the new government with regard to nuclear abolition?
I'm hopeful that the new government will earnestly address the issue of nuclear abolition regardless of party affiliation. U.S. President Barack Obama's speech in Prague was very moving and it stirred hope in us. But Mr. Obama alone cannot realize a world without nuclear weapons. Every person on our planet must change their way of thinking.

To this end, it is important for people to feel the horror of nuclear weapons in their hearts, not simply know the fact in their minds. I hope that the government of the A-bombed nation of Japan will promote such an effort. And I hope that all members of the Diet will visit Hiroshima, make a thorough tour of Peace Memorial Museum, and listen to the voices of the A-bomb survivors (hibakusha).

Do you feel that the whole picture, in terms of the A-bomb damage, has not yet been fully illuminated?
I think that's true. Science has not completely clarified the effects of the atomic bombings, including the genetic effects, on the human body. It's also true that hibakusha feel things like "I'm scared to know more about it" and "I don't want others to know about it." But overcoming these feelings and shedding light on these effects can help prevent the making of new hibakusha.

When I shared my experience of the bombing at an A-bomb exhibition in Chicago, a man who had been in the Marines for seven years and served in the Gulf War told me, "I now realize that the same symptoms I have were observed in hibakusha in Hiroshima and Nagasaki." His symptoms likely stem from the effect of depleted uranium. I felt a responsibility to tell the people there in accurate detail how dreadful radiation really is. I imagine there are a significant number of people in the world who don't even realize that they themselves are hibakusha.

What do you think of the "nuclear umbrella"?
I think it's vital to establish friendly relations in Asia. Regarding North Korea, if the nations concerned can build relationships of trust with each other, the nuclear umbrella will be unnecessary. What if the six-party talks were held in Hiroshima?

Emiko Okada
Ms. Okada, 72, is a resident of Higashi Ward, Hiroshima. She experienced the atomic bombing at the age of eight in the garden of her home, 2.8 kilometers from the hypocenter. She has been working as a Hiroshima Peace Volunteer at Hiroshima Peace Memorial Museum since 1999. She visited the United States in May 2009 for the Preparatory Committee for the Nuclear Non-proliferation Treaty (NPT) Review Conference and related her A-bomb experience at this gathering.