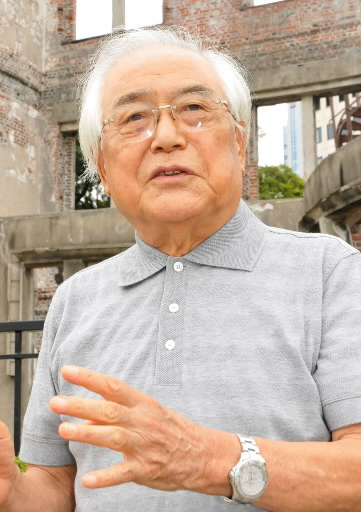 Former Hiroshima Mayor Takashi Hiraoka, 81, as someone who faced the reality of the atomic bombing and acted to advance a world without nuclear weapons, should be considered one of the most prominent figures of Hiroshima. Ten years after Mr. Hiraoka retired from office, the Chugoku Shimbun interviewed the two-term mayor about his life and thoughts as mayor and as a private citizen.

Now that the new administration has assumed power, we should discuss seriously whether the nuclear umbrella is really necessary to ensure Japan's national security. As long as nuclear arms exist, the human race runs the risk of extinction. This is what I have come to believe from what I experienced 64 years ago, and ultimately, this is about denouncing war itself.

The Japanese government, under previous administrations, has taken the stance that everything will be fine if Japan simply follows the United States, even after the Cold War ended. But Barack Obama was elected president of the nuclear superpower and he declared in his speech in Prague this past April that he would seek to realize a world free of nuclear weapons. Looking at his whole speech, though, it can be seen that he basically affirms the idea of nuclear deterrence. The City of Hiroshima has launched a campaign to support President Obama's vision, but there is no difference in thinking between relying on Mr. Obama and depending on the U.S. nuclear umbrella.

As long as Japan is being protected under the nuclear umbrella, we cannot send a convincing message to urge North Korea to give up its nuclear ambition. Similarly, China and Russia will have suspicions when we call for nuclear abolition. Some people argue that Japan would be attacked if it were not for the nuclear umbrella. But do they mean Japan is doing something so provocative that other nations will attack us? One of a politician's duties is leading the country in such a way so that other nations do not view us as an enemy.

With the Peace Declaration he delivered on August 6, 1997, Mr. Hiraoka became the first mayor of Hiroshima to call on the Japanese government to make efforts to build a national security framework without relying on the nuclear umbrella.

Japan will not engage in war so the only way to maintain peace is through diplomacy. Japan should work on improving its diplomatic influence. It is used to negotiating with the United States but not with other countries in Asia and other parts of the world. We should reflect seriously on this point.

I try to see issues related to nuclear weapons not from the perspective of a nation or international politics but from the viewpoint of a human being. This attitude was fostered through my experiences as a newspaper reporter in Hiroshima covering A-bomb survivors. I also learned from a senior colleague who I looked up to as well as my own war experience. A nation will easily abandon the weak, sacrificing them, especially, in the extreme conditions of war. I witnessed that while growing up on the Korean Peninsula.