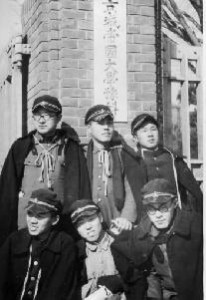 After he spent his boyhood in Korea under the colonial rule of Japan, he entered the sixth-founded Imperial University in 1944, three years after the outbreak of war between Japan and the United States.

In those days, American submarines began patrolling near the Tsushima Strait. This made it difficult to take entrance exams at a high school on the Japanese mainland. And so I entered the medical course at the Preparatory School for Keijo Imperial University [which was established in 1924]. This is partly because my father thought if I studied science, I might be exempted temporarily from conscription. We had to memorize the names of 300 bones in Latin and practice dissection. It was a crash course for future medical officers. I didn't think I was cut out to be a doctor.

The older students treated me like a child. I had spent four years at Keijo Junior High School but left there and entered the preparatory course because I hated getting struck by the teachers at the junior high for no apparent reason. As a result, I hadn't read any books on philosophy or social science. I felt frustrated that I was being treated like a child, so I smoked and drank. But I couldn’t catch up with the knowledge the older students had.

Students were mobilized to work in Korea, too. In the summer I was a freshman, we carried dirt in a straw basket near Gimpo Airport [near Seoul]. As a sophomore, we were sent to Hungnam [present-day Hamhung, North Korea] and worked in three shifts at a chemical factory of the Chisso Corporation [then called the Japan Nitrogenous Fertilizer Company]. Then August 15 came.

As we were working at the time, we didn't hear the broadcast of the Emperor's announcement of Japan's surrender. In the early afternoon, we heard the war had ended. We mounted a crane and took off all the blackout curtains around the factory. On our way back to our lodgings, we repeatedly heard the announcement by the Keijo Central Broadcasting Station that "Japan's national political system would be retained."

At our lodgings I drank with other Japanese students, feeling depressed. One of them said we might be able to stay in Korea as alien residents. Our Korean classmates suddenly became cool toward us and they went into town. I heard they were excitedly claiming that Korea would become independent.

The next day in town I found a lot of posters that said: "Japanese imperialism, Japanese people, Leave Korea immediately." But, I had a hard time understanding what those posters meant. I had never thought I was living in a colony. Just like my Japanese friends who were born and raised there, I felt that the land, mountains and rivers were part of my homeland.

When the Soviet Union began its invasion of northern Korea, more and more Japanese people started fleeing the area. Although I was faced with a life-or-death situation, the Korean farmers were still cultivating their fields. At that moment, I suddenly became aware of the absurdity of a theoretical idea of nationalism. When the going gets tough, the state will desert its own vulnerable citizens. But even amid such extreme conditions, ordinary people just keep working to feed themselves. This is the real business of life, I thought.