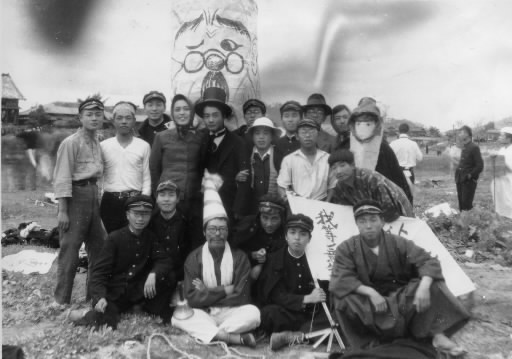 
Leaving Korea for his mother's hometown

Mr. Hiraoka was still working as a mobilized student, at a chemical factory in Hungnam (present-day Hamhung, North Korea), when Japan surrendered on August 15, 1945.

I think we finally reached Seoul on August 22 after riding on an open freight car for two days. When we arrived at the Preparatory School for Keijo Imperial University, the younger Korean students told us, "We appreciate your good work, but the school is ours now." We just accepted it, like "Oh, okay," and went home.

But I couldn't find anyone at our house near the West Gate. A man who lived in our neighborhood came up to me and said, "I've taken over your house." So I headed for Itaewon at the foot of Namsan Hill, where we had another house in case of air raids. I found my parents and brothers there. They had seemingly given up on the house that was confiscated from us.

Right after the war ended, many Japanese citizens in Korea hoped to stay there, but the United States Army Military Government in Korea was established on September 20 and announced a policy of repatriation. About 400,000 Japanese left Korea for Japan.

My parents, my four brothers, and I--the seven of us--left Busan [a port city in southern Korea] and arrived at the town of Senzaki [Nagato City, Yamaguchi Prefecture] about ten days after Typhoon Makurazaki hit Japan on September 17. There were floating mines in the port of Shimonoseki [Yamaguchi Prefecture] and boats couldn't enter it. We had already heard that an atomic bomb was dropped on Hiroshima while we were still in Hungnam, but we didn't know how great the damage was. I was shocked when I got off the train at Hiroshima Station, because I could see Ninoshima Island off the coast. We settled at the home of my mother's parents in Furuta-machi [present-day Nishi Ward in Hiroshima]. My grandfather had left a house and some farm land.

We could barely feed ourselves, but I applied for admission, as a transfer student, to the former Hiroshima High School [a forerunner of Hiroshima University, it closed in 1950] and enrolled in a science program just because I took science at Keijo Imperial University. Lectures started in 1946 at the former Otake Submarine Crew Training School and the following year our department moved to the Minami-machi campus [in Minami Ward, Hiroshima]. Our classroom teacher was Tadayoshi Saiga [a professor at the former Hiroshima High School who wrote the words inscribed on the Cenotaph for the A-bomb Victims, erected in 1952]. I started to read books by Lenin because I was ridiculed for my lack of knowledge of sociology when I was at Keijo Imperial University.

Since the restoration of diplomatic ties between Japan and South Korea in 1965, I have visited there numerous times. Since I used to live in Korea, some Korean people see me as a dog of Japan's colonial rule, while others show closeness. One of my friends at Keijo Imperial University, who became a doctor, showed me a collection of Japanese military songs at his house in Seoul. "This symbolizes my youth," he told me. The Korean people were deprived of their national pride so I hold some reservations about saying I feel nostalgic for Korea.

When I went to South Korea last spring, though, I saw weeping forsythia and azaleas in bloom. I have a deep emotional attachment to the sight of the mountains and rivers there.