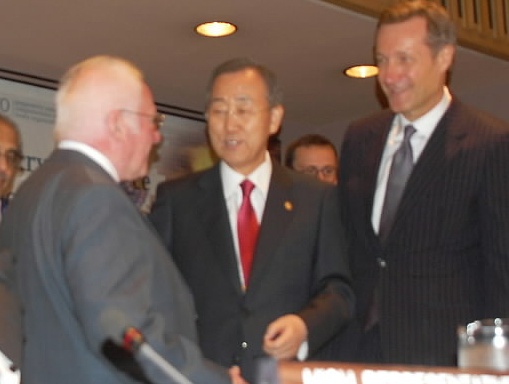 The international community has made a fresh start in moving forward toward "global zero." Last month the UN Security Council Summit unanimously adopted a resolution to eliminate nuclear weapons. Prime Minister Yukio Hatoyama, the new leader of the A-bombed nation of Japan, was also there, making his diplomatic debut. Nuclear abolition is no longer a fantasy, and the final goal of elimination is now within reach. The Chugoku Shimbun is following these developments in the world as well as in Japan, both of which have made a fresh start.

In a single moment, the tension felt in the heavily guarded venue changed to elation. On the morning of September 24, at UN Headquarters in New York, all 15 heads of State and Government assembled in the Security Council raised their hands together. "There were fifteen votes in favor. The draft resolution has been adopted unanimously as Resolution 1887 of 2009," U. S. President Barack Obama, chairing the meeting, declared in his deep voice. U.S. Secretary of State Hillary Clinton, seated behind him with a dour expression, smiled and nodded, looking pleased.

UNSC Resolution 1887 proclaims a commitment to creating the conditions for a world free of nuclear weapons. The fact that it was sponsored by the United States, a nuclear superpower, and was unanimously adopted by the Security Council membership, including the five permanent members, all nuclear weapon states, is highly significant.

Also being held at UN Headquarters was the Conference on Facilitating the Entry into Force of the Comprehensive Test Ban Treaty (CTBT). Entry into force of the CTBT is a test for achieving the abolition of nuclear weapons. UN Secretary-General Ban Ki-Moon, shuttling between the two venues, looked on in person as the Security Council resolution was passed. "This is an historic moment," he stated to the gathering. "A moment offering a fresh start toward a new future." The secretary-general then turned to President Obama, seated to his left, and expressed a heartfelt "warm welcome." After the resolution was adopted, the leaders of the member nations were each given five minutes to make a statement.

Yoweri Museveni, the president of Uganda, remarked: "It is clear that the possession of nuclear weapons is the main cause of other countries wanting to acquire them. It is not logical to say that a few of us should possess nuclear weapons and others should not. Thus, we can see that the main cause of nuclear proliferation is actually the possession of those weapons." Among the ten nonpermanent members of the Security Council, six nations, including Vietnam and Costa Rica, both signatories to nuclear-weapon-free-zone treaties, referred to the responsibility of the nuclear powers.

The responsibility of an A-bombed nation

France is one of these nuclear powers. French President Nicolas Sarkozy poked the desk with his finger several times and made an impassioned speech, hardly turning to his prepared remarks. "We are right to talk about the future," he said. "But the present comes before the future, and the present includes two major nuclear crises." Mr. Sarkozy, while denouncing the nuclear programs of Iran and North Korea, did not touch on the fact that France itself possesses nuclear weapons.

Ironically, right after the Security Council resolution was adopted, it was revealed that Iran is constructing its second uranium enrichment plant.

In order to narrow the distance between the ideal of "global zero" and its reality, and spread this vision among the international community, what actions should be taken first?

Prime Minister Hatoyama, too, spoke at the UN Security Council Summit and referred to the nation's "moral responsibility…as the only victim of nuclear bombings" in declaring that "Japan should take the lead in the pursuit of the elimination of nuclear weapons."

The particular policies and actions of Japan's new administration will play a key role in the realization of nuclear abolition.