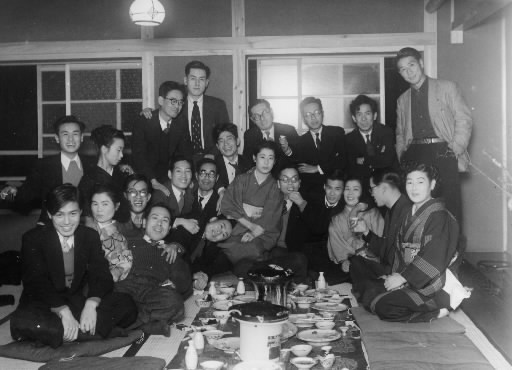 
Working for the Chugoku Shimbun

In 1952, when Japan recovered its sovereignty from the United States, Mr. Hiraoka left Tokyo and returned to Hiroshima.

I had to find a job. RCC Broadcasting Co. Ltd. had been just established and was recruiting. [The company was called Radio Chugoku at the time and had a studio at the Chugoku Shimbun headquarters.] I had no idea what sort of work a mixer did, but I passed the written test. I wasn't accepted, though, because the results of a physical exam indicated that something was wrong with my lungs. I went to another hospital to be examined, but they found nothing wrong. So I went back to the broadcasting company to complain. They told me that the Chugoku Shimbun was recruiting staff so I submitted an application.

As a consequence of the communist purge that took place while Japan was under occupation, I was asked about my political affiliation at the interview. I did not say I supported the conservative party that was in power, but fortunately I passed and was able to join the company in September 1952.

As I was young, with literary aspirations, I wanted to write. But, against my wishes, I was assigned to work at the news desk. I persuaded myself that I had to make a living. Once I got used to the job, the chief copy editor didn't want me to leave the department. At that time the newspaper was increasing its number of pages.

In 1951, controls were lifted on the paper used for newspapers. Each newspaper company established its own network of distributers, and the newspaper industry entered an era of free competition. The Chugoku Shimbun, which was revived after its headquarters was destroyed by the atomic bombing, increased the pages of the morning edition to eight in October 1952, and to 12 in 1954.

In those days, the copyreader in charge of the front page, however young the person was, read all the articles from Kyodo News and had the authority to decide which article should be carried where. I worked on the social page, and then the front page. I learned a lot but I was still frustrated as I didn’t have a chance to write.

When the headquarters of the newspaper was in Kami-nagarekawa-cho (in Naka Ward, Hiroshima), debt collectors stood in line at the entrance on payday. I'm not exaggerating. Newspaper reporters back then still embodied the atmosphere of the old days when they were satirized as well-dressed rogues, like the legendary outlaws living in the natural fortress of Mount Liang [which appears in a classical Chinese novel, Water Margin].

You might call it youthful indiscretion. Even after I got married, I must admit that I thought too highly of myself. I was fed up with what I had to do at the news desk and got in touch with a senior alum from Waseda University who worked for a publishing company. When I told my wife, Fusako, that I had decided to quit my job, she told me she was expecting our second child. So I gave up the idea of working in Tokyo.

I finally left the news desk in 1961, one year after the conflict over the Japan-U.S. Security Treaty. I was the secretary-general of the labor union. Toshihiro Kanai, then head of the Arts and Cultural News Department, came to know the trouble I faced in the company over a personnel transfer and took me into his department. There I started to cover issues related to the atomic bombing.