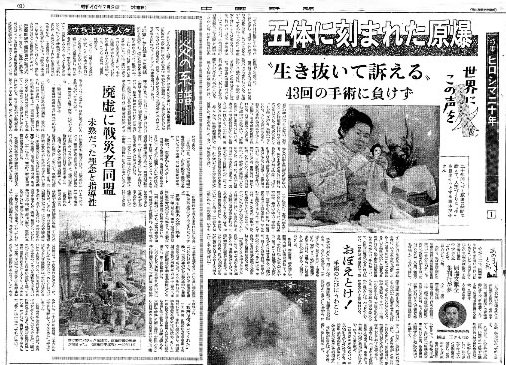 In 1965, during the time of Japan's rapid economic growth, Mr. Hiraoka was engaged in a series of articles covering the 20 year-period after the atomic bombing.

After some twists and turns, a reporting team was formed. The Chugoku Shimbun launched Sports Chugoku in 1964, the year the Tokyo Olympic Games were held. I was transferred from the desk of the cultural news department to be the head of the news desk of the sports paper. Seven people had to fill up four pages every day, which was like walking on a tightrope. But due to sales problems, the paper folded. [Sports Chugoku was published from January 25, 1964 to January 31, 1965.] There were no departmental openings for me, and I wasn’t doing much work as a senior staff writer when Toru Kanei [the general news editor who later became the associate editor] said he would provide the necessary personnel and told me to form a reporting team.

As for the content of our coverage, we decided to work on the history of the atomic bombing from different points of view, including that of the Atomic Bomb Casualty Commission [ABCC, now the Radiation Effects Research Foundation]. At the time, there was no comprehensive collection of information, and not much work had been done to analyze nuclear weapons from a human perspective. As for the reality of the bombing, we decided to follow the example of the in-depth report "Testimonies of Hiroshima." ["Testimonies of Hiroshima" was the first extensive reportage, which appeared in the Chugoku Shimbun in 1963 in 33 installments, by three general news reporters: Shigeru Kawada, Yoshio Asano and Akira Matsuura.]

"The summer in Hiroshima is hot, and these 20 years in Hiroshima are unbearably heavy, as all the burdens of post-war Japan are concentrated on the one point of Hiroshima." So begins Mr. Hiraoka's "Journey from the Fire." Along with this series of articles, "Convey These Voices to the World," by Yoshio Asano and four other reporters, and "20 Years After the Bombing," based on the chronicle "Record of Hiroshima," made up one page of the Chugoku Shimbun from July 8 to August 6, 1965. The series won the Japan Newspaper Publishers & Editors Association Award (the Nihon Shinbun Kyokai Award) in 1965. This series laid the foundation for A-bomb-related news reporting.

At first we planned to run the articles on different pages, but Mr. Kanei accepted my idea of carrying all the articles on one page to create greater impact. Securing a whole page every day wasn't easy. [In those days, the morning edition had 14 to 16 pages.] These series were also unprecedented in regard to their form. When it comes to A-bomb coverage in the Chugoku Shimbun, Toshihiro Kanai may be mentioned first, but Mr. Kanei's contribution was also significant. [Mr. Kanei died in 1996 at the age of 75.]

Looking back, I have some regrets. The grassroots movement to ban the bomb [which was triggered by the U.S. hydrogen bomb test on the Bikini Atoll in 1954 and collected 36 million signatures] was fractured by the different policies of the political parties and each organization mounted a campaign of its own. People didn't realize that the movement itself could save human beings, but instead put priority on each organization's policies. The survivors' group in Hiroshima also split into factions. Young people today won't understand why. Was it enough for us just to criticize this fractured movement? I think we should have considered the nature of the anti-nuclear movement more deeply, including the Japan-U.S. Security Treaty issues.