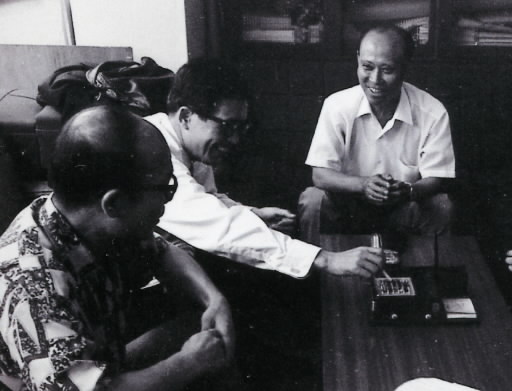 After the Treaty on Basic Relations between Japan and the Republic of Korea was signed, diplomatic relations between the two countries were restored in 1965. Mr. Hiraoka immediately began to report on A-bomb survivors in South Korea.

The editorial department received a letter from Masan, South Korea, and it was forwarded to me. I was shocked to read a letter that was written in Japanese by a Korean man. The man said that he went to school in Hiroshima and was exposed to the atomic bomb near Hijiyama Hill [in Minami Ward, Hiroshima]. He said he wanted to receive medical treatment.

I knew that Koreans were also exposed to the bomb, but I had never thought deeply about what this meant. The fact that their suffering had been compounded through colonial rule and the atomic bombing just didn't dawn on me.

Since I grew up in Korea, I was familiar with the country to some extent. I had finished the series "20 Years After the Bombing" and didn't have regular articles to write. So I said to Toru Kanei (the associate editor): "I'd like to go to South Korea to gather news material. Could you buy my articles for 5,000 yen each?" If I wrote ten articles, I would be able to buy a plane ticket from Osaka. Though Mr. Kanei might have been held responsible if I had run into an accident of some kind, he was an extraordinarily broad-minded boss and he simply answered, "Okay." Back then, the company was a rather lenient environment.

"South Korea, Our Neighbor" appeared in ten installments on the front page of the morning edition starting on November 25, 1965. This series conveyed how Korean A-bomb survivors lived in dire poverty during the Korean War and it called for providing them with support. A revised edition, "Visiting Korean A-bomb Survivors," appeared in the April 1966 issue of the magazine "Sekai" ("World"). The article was also included in "Testimonies will not Disappear" published by Miraisha.

I wrote: "Understanding the plight of the Korean A-bomb survivors is to recognize the Japanese people's historical responsibility." Through covering the stories of Korean survivors, I came to see our responsibility as an aggressor, to which we had blinded ourselves believing we were the war's victims. It may have been out of a simple sense of justice, but I couldn't ignore those neglected by both the Japanese and Korean governments. Ryosuke Yasue, who was in the editorial department of the magazine "Sekai," found my article and I began to write for magazines published in Tokyo. [Ryosuke Yasue later became president of Iwanami Shoten Publishers. He died in 1998.]

Newspaper reporters have some instinct for seeking fame. But if you don't have a strong spirit and determination, you can't write a good article. No matter how much I said and wrote that the issue of the Korean A-bomb survivors was important to Japan, people thought I was just pursuing my own interests. The survivors' organizations in Hiroshima didn't pay attention to this problem, either. So I started to get personally involved in their support and in the court case of a Korean survivor who entered Japan illegally.