Bid for Olympic Games as a Celebration of Peace, Part 1 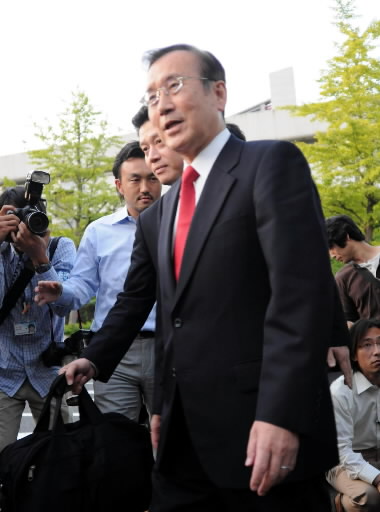 by the Olympics Issues Reporting Team

The cities of Hiroshima and Nagasaki will soon establish a joint committee to discuss issues related to the cities' bid to host the 2020 Summer Olympic Games. By appealing for the Olympics as a celebration of world peace, the cities are hoping to clear high hurdles, such as the possibility of multiple cities hosting the Games. How did the mayors of the two A-bombed cities come to embrace this dream they have announced to the world? The Chugoku Shimbun will examine the challenges and the feasibility of their bid.

On the late afternoon of October 13, after visiting the Japan Olympic Committee (JOC) in Shibuya Ward, Tokyo, Hiroshima Mayor Tadatoshi Akiba smiled as he told some 100 reporters of his gratitude for the warm welcome he was extended at the 15-minute talk with JOC Secretary General Noriyuki Ichihara.

The purpose of Mayor Akiba's visit to JOC was to offer explanation for the "declaration" he and Nagasaki Mayor Tomihisa Taue issued at a press conference two days before: Hiroshima and Nagasaki will seek to co-host the Olympic Games. The cities' grand plan has drawn a mixed reaction from in and out of the country.

"We don't know what to do if Tokyo should try again by bidding for the 2020 Games," said an executive member of Tops Hiroshima, an NPO which is organized by Hiroshima's top sports teams and had been supporting Tokyo's bid for the 2016 Olympics. Masanori Fukuda, vice president of the Hiroshima Chamber of Commerce and Industry, was surprised at the announcement and said, “My mind is a blank. I've never thought of having the Olympics in Hiroshima."

Mayor Akiba had not previously shown a concrete intention to host the Olympics. He hinted of his enthusiasm for the idea, though, at an ordinary session of the city assembly in June 2007. "If the Olympic Games break away from their excessive commercialism and restore their ideal of a celebration of peace," he said, "I would like to launch a bid to host the Games."

Things then started to develop below the surface in May 2008. Hiroshima City officials made inquiries to the JOC about Tokyo's plan for the bid and the seating capacities of stadiums. Those involved said that city officials made the move in line with the mayor's wishes.

In September 2008, Mayor Akiba wrote about his dream to co-host the Olympics with Nagasaki in a newsletter issued by the city. But not many people took it seriously as a realistic proposal.

Meanwhile, the international situation surrounding nuclear weapons changed dramatically when Barack Obama, an advocate of a world without nuclear weapons, took office as president of the United States in January of this year. The efforts by Mayors for Peace, of which Mayor Akiba is president, have gained momentum as well.

When Mayors for Peace held its general conference in Nagasaki on August 8, its action plan stated that it would be splendid if the elimination of nuclear weapons should be celebrated at the 2020 Olympic Games co-hosted by Hiroshima and Nagasaki. Mayor Akiba apparently decided to seek to host the Games for 2020, the year he aims to achieve the long-held dream of nuclear abolition.

Two months after the conference, the two mayors made an enthusiastic appeal for the Olympic Games to serve as a symbol of nuclear abolition and lasting peace. Their news conference was covered even on variety shows on Japanese television and garnered worldwide attention.

The news conference took place nine days after Tokyo lost in its bid to host the 2016 Games, and two days after President Obama was selected as the Nobel Peace Prize Laureate. Senior officials of the Hiroshima City Government assume that Mayor Akiba had been seeking the best timing to leverage a positive impact and so announced his plan prior to obtaining the agreement of concerned parties.

The "Olympics for Peace" announcement came rather out of the blue without prior coordination with the prefectural government or local organizations. Behind this decision appears to lay the mayor's calculated strategy to seize the best opportunity to rouse public opinion for nuclear abolition.

Hiroshima-Nagasaki Olympic Bid Committee (English name pending)
This committee will be organized in the near future with the mayors of Hiroshima and Nagasaki and the leaders of other cities. Before the cities finally decide whether they will officially announce their bid to host the 2020 Games, the committee will discuss relevant issues, including the following:
1. Whether the International Olympic Committee will accept the idea of multiple cities hosting the games
2. Whether the Japanese national government will support the cities' bid
3. Whether necessary funds for the games can be secured