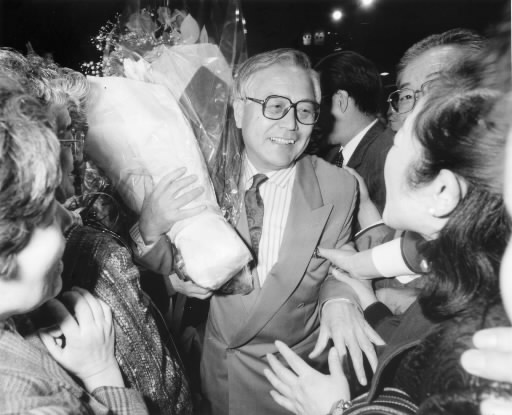 After serving as the editor-in-chief of the Chugoku Shimbun for seven years from 1975, Takashi Hiraoka was transferred to the RCC Broadcasting Co., Ltd., of which he became president in 1986. It was an unexpected transition.

The situation at the time meant that someone from the newspaper company had to move to RCC, and I was picked. I was able to settle a problem over the promotion of members of the labor union, and I sold some land that had become a burden for the company. I don't have much practical knowledge about broadcasting so I wouldn't consider myself a professional in the broadcasting industry.

Even though it was the peak of the economic bubble, advertising revenues in Hiroshima were on the decline. The city was set to host the Asian Games [in 1994], and I was concerned about the weakening state of the city. That's one reason I poured a lot of energy into community building projects. I suggested some economic development projects at meetings of the Hiroshima Association of Corporate Executives and, with Shin Kato, I organized unique festivals at Hiroshima Castle featuring traditional fare from villages with dwindling populations. [Shin Kato was involved in the revitalization project for a shopping street in Naka Ward, Hiroshima. He died in 2005.] I had never dreamed of running for mayor.

In August 1990, four-term Hiroshima Mayor Takeshi Araki, then 74, announced that he would not run again, and recommended the then chairman of the Hiroshima Prefectural Medical Association to be his successor.

In fact, it was Manzo Hamamoto who first suggested I run for office. [At the time, Mr. Hamamoto was a member of the Upper House, from the Socialist Party, and he died last year.] He came to see me at work in March 1990. Some other people involved in the Socialist Party of Japan asked me to run, but I declined all their requests.

But in fall of that year, Akira Fujii, a senior alumnus of Hiroshima High School and executive managing director of Mazda Motor Corporation laid the groundwork for persuading me to run. I had neither money nor courage. I was reluctant but Osamu Hashiguchi [then chairman of the Hiroshima Chamber of Commerce and Industry, he died in 2005] pressed me for a decision about running. "You say you want to revitalize the city but you're all talk and no action!" he said to me. "Let's launch a campaign!" I wasn't able to counter with a brash attitude like "That's just the nature of people in the media." I was weak, in a sense. My wife was dead set against my running, but I announced my candidacy in November.

At a time when people sensed crisis in the vitality of the city, I had a role to play, I guess. But I didn't think I could win. Part of the supporters of the Liberal Democratic Party separated from the party and supported me, but the rival candidate was leading. When I went around the city in a car appealing, "Make Hiroshima a vibrant city," I didn't receive a strong response from the public. But, about one week before election day, I saw housewives come out of their houses to greet me and nurses wave their hands from hospital windows. I could feel that citizens were really hoping for a change in municipal politics. I thought I had a good chance of winning.

Seven first-time candidates ran for office in the February 1991 mayoral election, and Mr. Hiraoka was elected by winning a record 276,000 votes.