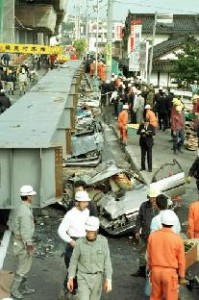 
Mayor himself offers apologies and seeks to persuade

After assuming office as mayor of Hiroshima, Takashi Hiraoka was quickly faced with a tragedy. In the early afternoon of March 14, 1991, a heavy girder fell at the construction site of an elevated rail track, killing 15 and injuring eight, in Asaminami Ward, Hiroshima. The bridge was part of a transportation project ordered by the city.

I first heard about the accident while I was in Tokyo on an official trip. I returned to Hiroshima right away and began visiting the homes of the victims and the hospitals where some had been hospitalized, offering my apologies. But in negotiations involving compensation, I had no choice but to say, "The City is not responsible for the accident." The media was critical of the city government, but if I had admitted the municipal government's responsibility for ordering the project, it would have then affected all public works. In view of my position, I had to take that stance, but personally it was very painful.

In 1996, three employees of the principal contractor [based in Chiba Prefecture] were found culpable for the accident. In seeking compensation for damages, families of the victims dropped their claim against the city government in 1998.

In September, during my first year in office, salinity damage caused by Typhoon No.19 of 1991 resulted in power failure. [The loss amounted to 2.9 billion in commerce and industry.] The following month, cyanide was detected in the water of the Otagawa River. [The water supply was cut off at some 360,000 households.] Because of these urban disasters, I deepened my understanding of crisis management.

As I had only a limited amount of time after announcing my candidacy, I had not decided on the details of my policies. There were many different projects underway as the Asian Games were to be held in Hiroshima in three years. Administrative works and projects have continuity. There are only three projects that I ordered be reassessed.

One was the redevelopment project around so-called Block A near the south exit of Hiroshima Station. [The initial plan was created in 1981.] Two of the land owners had dropped out and there was no way to avoid what would be a flawed appearance for the entryway to a city of one million. Nevertheless, the plan was given a green light to be completed before the Asian Games. I visited those land owners in the evenings and tried to sort out the emotional entanglements, eventually winning their consent. [The building housing Fukuya Department Store and an underground public square were completed in 1999.]

The second project was the Hiroshima Peace Institute. The original plan called for it to be an incorporated foundation and located near the east building of Peace Memorial Museum. But we would not have been able to invite researchers that way. My intention was to make it an affiliated organization of Hiroshima City University [which was established in 1998] where peace policies are made and proposed to countries around the world.

The third project involved keeping Hiroshima Nishi-Airport alive. [Hiroshima Nishi-Airport is located near the city center.] When I told Toranosuke Takeshita, then the governor of Hiroshima Prefecture, that I intended to keep the airport open, he blew up. Hiroshima Airport was set to open soon [in 1993, some distance outside the city] and Governor Takeshita and then mayor Takeshi Araki had already exchanged memorandums which said all the functions of the old airport should be transferred to the new airport because some citizens were opposed to planes flying near the downtown area. But I felt an airport in a convenient location was vital for the running of the city.

City officials are very efficient. Once the policy is decided at the top, they work on the details and flesh it out. For the redevelopment project of Block A, I did a lot on my own, but other projects were carried out through the combined effort of city officials. As my slogan was "Citizens should play a leading role," I wanted to make city hall a place where officials could speak freely. I think the section managers at that time were mindful of this in their work.