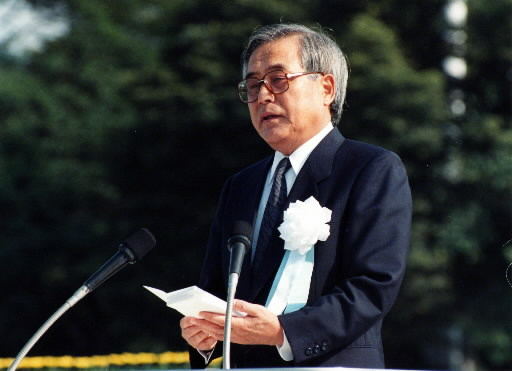 Hiroshima mayors have delivered peace declarations at the Peace Memorial Ceremony on August 6 each year since 1947. [One exception was 1950, the year the Korean War broke out.] In 1991, Takashi Hiraoka became the fifth mayor to give the Peace Declaration.

There are essentially two aspects to the Peace Declaration. One is the repose of the A-bomb victims' souls, and the other, which arises from the first, is the appeal for nuclear abolition. Reading peace declarations from the past, we can see what Hiroshima was thinking through the political conditions and international circumstances of the times.

In preparing for my first Peace Declaration, uppermost in my mind was the significance of hosting the Asian Games three years later. Up until then, the prevailing opinion was that the Games were a good opportunity to improve the city's infrastructure. But the Asian Games are not just a sports event. The Games were launched in 1951 under the leadership of Jawaharlal Nehru, the first prime minister of India. After its defeat in the war, Japan was excluded from the international community. But the Games opened a door for Japan to reconnect with the world. We should not forget such a debt. So, in my speech, I felt I should convey what the people of Hiroshima thought to Asian countries.

Hiroshima's appeal for peace is not necessarily accepted in Asia. People from both China and South Korea say that the atomic bombs brought an end to Japan's imperialism, and their countries could then win independence. I considered it important to clearly express my understanding of history. That was an important part of my first declaration.

In his 1991 Peace Declaration, Mr. Hiraoka offered an apology to Asian countries. "Japan inflicted great suffering and despair on the peoples of Asia and the Pacific during its reign of colonial domination and war," he said. "There can be no excuse for these actions." This came earlier than the war apology statement made by then Prime Minister of Japan Tomiichi Murayama in 1995.

I was aware of the political situation surrounding me and that the city council's Liberal Democrats were important supporters. Also in my mind was Hitoshi Motoshima, then mayor of Nagasaki, who had been shot the year before, after saying that the Emperor was responsible for the war. As a human being, it wasn't easy finding the right words to express such an apology. This is why the language isn't very articulate.

The left wing would say that I should apologize more forthrightly, while the right wing would say "What gives you the right to say something like that?" But we were going to hold the Asian Games in Hiroshima, so I felt the apology was necessary. I wrote the whole declaration myself, though I received advice from people who had written previous declarations.

The Peace Declaration is issued on behalf of the citizens of Hiroshima, though it naturally reflects the mayor's thoughts and historical view. But if these are allowed a front seat, it would become a personal declaration. It's hard to reach just the right balance.