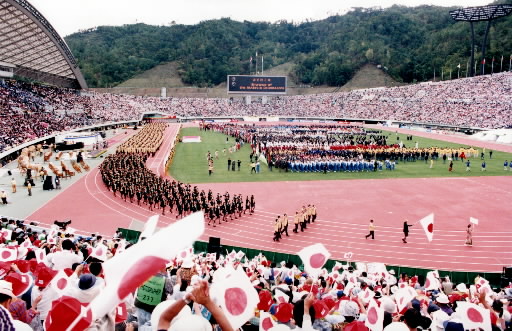 Forty-two countries and regions participated in the 12th Asian Games held in Hiroshima in October 1994. There was much wheeling and dealing involved in a non-capital city hosting the Games.

I had heard that the Games might end up a failure. After I took office [in 1991], the secretary general of the organizing committee, who was sent from the Japan Sports Association, resigned. I immediately ordered the senior deputy mayor to double as secretary general. There was pressure from outside to have a senior official from my predecessor's time replaced. But I didn't. I believed we should have an able official standing at the head of our staff for the success of the Games.

I began to wear a badge for the promotion of the Games, then staff members followed suit. It was the first step for raising awareness. At the board meeting, we discussed the idea of each elementary school supporting a country or region. If we could involve parents, citizens would have more interest in the Games. But the Superintendent of Education looked perplexed, saying it was difficult to involve schools because of problems concerning the union.

So we asked the Social Education Division for some ideas. They suggested having the city's community centers, a total of 61 at the time, each support one country or region. This idea came from Yoshifumi Ueda, then a senior staff member of the Chuo Community Center.

In 1984, Hiroshima announced its candidacy to host the Asian Games, mainly as an opportunity to improve its infrastructure. Such thinking wasn't wrong, but I thought very seriously about the fact that the Games would be hosted in Hiroshima, a city that has been appealing for world peace. Particularly for that reason, I felt the presence of the Emperor was essential, and I was determined to invite him.

The Ministry of Foreign Affairs had announced as early as the spring that the Emperor and Empress planned to visit Europe in October 1994 so it would be difficult for them to attend the opening ceremony of the Games.

The Chinese and Korean people have deep concerns about honor. Without the Emperor's presence, not only the Chinese and Koreans, but people from other countries, too, would have felt slighted, believing they were ranked below the Europeans in Japanese eyes. The Games, which were supposed to contribute to peace, would become embroiled in a political dispute. Through Yutaka Narita, [then president of Dentsu Inc. and] an alumnus of my junior high school, I contacted Sadame Kamakura, then vice-grand steward [and later grand steward] of the Imperial household Agency, and conveyed my request. Mr. Narita and Mr. Kamakura are childhood friends. Mr. Kamakura understood, and the Imperial couple came to Hiroshima despite their busy schedule. [After coming to Hiroshima, the Imperial couple left for Europe from Kansai International Airport.]

Many of the exchange activities based on the community center project ended after the Asian Games due to circumstances in the partner countries or the fading zeal of the participants. But the citizens of Hiroshima still convey the city's message and engage in exchange activities with people from many corners of the world. This is seen in such activities as assistance to the radiation sufferers in Kazakhstan, the construction of Hiroshima House in Cambodia, and the Hiroshima-Oman Friendship Association. These are surely fruits of the Asian Games.