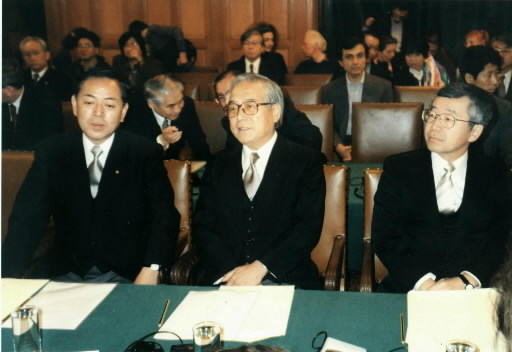 
Speaking at The Hague, defying pressure from the government

In 1995, 50 years after the atomic bombing, hearings were held at the International Court of Justice (ICJ) on the illegality of the use of nuclear weapons.

After much intrigue, I made a statement at The Hague in the Netherlands. The Japanese government didn't give a clear response to the request made by the ICJ to submit a written statement by June 1994. So, Nagasaki Mayor Hitoshi Motoshima and I, in our own names, sent a joint letter to the ICJ, requesting an opportunity for us to give statements. But we received a response [in October], which said that only nations or international organizations were being given this opportunity.

After that, the Republic of Nauru, an island nation in the South Pacific, asked me to join them at an ICJ hearing since the country was planning to state that the use of nuclear weapons was illegal. I thought it would be awkward if the mayor of Hiroshima attended such a hearing alongside Nauru, so I declined the offer. I added, though, that if the Japanese government itself wouldn't declare that the use of nuclear weapons was illegal, I would accept their offer. The Peace Declaration I delivered on the 50th anniversary of the atomic bombing [August 6, 1995] was partly a challenge to the written statement the Japanese government submitted to the ICJ earlier [in June]. The government statement used very vague language: The use of nuclear weapons does not conform to the spirit of humanitarianism.

In his declaration, Mr. Hiraoka stated that "Atomic bombs are inhumane weapons and a clear violation of international law." In September, shortly before the Japanese government was set to deliver its statement at the ICJ, it named the mayors of Hiroshima and Nagasaki as the nation's representatives.

I guess the government heard about the offer Nauru had made to me. Some other countries had argued that the use of nuclear weapons was a violation of international law, too. So, if I had made my statement while representing a foreign country, the Japanese government would have lost face. That must have been the reason, I think.

The government applied pressure on me, saying my statement should be consistent with that of the government's, but I didn't pay much attention, considering it only a request. When I was discussing the details of my statement in my office, I got a call from Yohei Kono [then Foreign Minster]. I told him, "You know what my thinking is through the declaration," and he said, "That's why I'm calling you." I just told him I could not comply with his request. Period. I guess he called me because Foreign Ministry officials were begging him for help.

But it seems the mayor of Nagasaki was under even greater pressure.

Iccho Ito was a Liberal Democrat and member of the prefectural assembly before he was elected Mayor of Nagasaki [in the April 1995 mayoral election]. He had been a vocal critic of Mr. Motoshima. He received pressure from a variety of routes, and this made him very anxious. As we both had graduated from Waseda University, we were on friendly terms and he called me "senpai," his "senior." Before we left Japan [in early November], I told him that the mayors of the two A-bombed cities should stand united. I think he felt, as mayor of Nagasaki, that he had a mission to call for the elimination of nuclear weapons, and he forged ahead despite the pressure he felt. After coming back from The Hague, he was sometimes ahead of Hiroshima in his efforts. For that reason, I was deeply dismayed when he was gunned down [in April 2007].