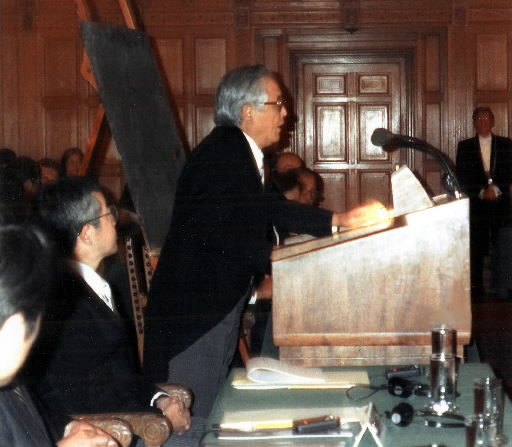 Takashi Hiraoka delivered a statement at the International Court of Justice (ICJ) in The Hague, the Netherlands, on November 7, 1995.

I'm not an A-bomb survivor. So, as someone from Hiroshima, I tried to convey everything that had occurred close to me and all my thoughts on the subject: the death of my cousin, who I considered a younger sister, and my aunt's grief; my wife's account of more than 200 of her schoolmates perishing in the blast while working to dismantle houses to create a fire lane; the painful memories set down by Futaba Kitayama, with whom I worked in the same office at the Chugoku Shimbun. [Futaba Kitayama died in 1980.] I referred to the Hague Convention and stated that the use of weapons of mass destruction was contrary to international law, which originated in contemporary Europe. I was able to make good use of my experience as a newspaper reporter, covering court cases involving A-bomb survivors.

In a court case in which five survivors filed a suit against the national government claiming compensation for loss and damages, the Tokyo District Court dismissed their claims [in 1963] but stated, "The dropping of indiscriminate bombs is against the fundamental rules of war." I read the whole trial record and I still remember it. The theoretical development of my statement was based on this record.

Minoru Omuta gave me advice regarding the part where I talked about microcephaly patients, people who were exposed to radiation while in their mother's womb. [Minoru Omuta was the chief editorial writer of the Chugoku Shimbun before he became chairman of the Hiroshima Peace Culture Foundation. He died in 2001.] After the Foreign Ministry approved of my giving a statement [in September], I wrote the draft bit by bit. I finished writing it at a hotel in Fukushima, [in the northeastern part of Japan], while I was there on an official trip [from October 27 to 29]. I didn't have enough time to work on it in Hiroshima because I had meetings at night, too.

Mr. Hiraoka declared: "The atomic bomb was responsible for the indiscriminate mass murder of civilians and for keeping human beings suffering from radiation damage to this day. It is clear that the use of nuclear weapons is contrary to international law." But the Japanese government stated merely that the use of nuclear weapons "does not follow the spirit of humanitarianism" and it avoided taking a clear stance, adding that the statements by the mayors of Hiroshima and Nagasaki are made "independently" of the government's policy.

Yoko Teichler, a Japanese woman who still lives in Germany, gave the simultaneous English interpretation of my statement. She was very involved in peace issues and did a wonderful job. The 14 judges listened attentively to my statement. And their ruling was issued the following year.

I felt the advisory opinion showed the limitations of a United Nations agency controlled by nuclear states. The fact that the Court did acknowledge the illegality, though "generally," was certainly progress. But once you start talking about the survival of a state, any country would be able to use nuclear weapons. There should be no loophole. It was around the time I made my statement in The Hague that I became keenly aware of the contradiction of preaching denuclearization while under the protection of a nuclear umbrella.