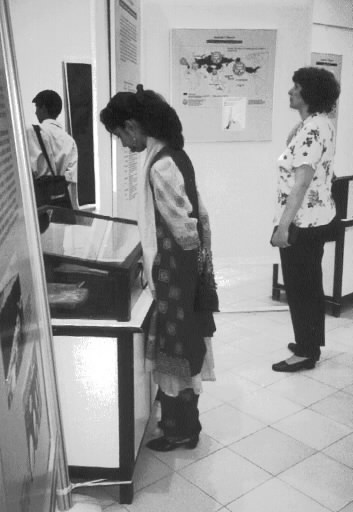 In 1995, the National Air and Space Museum of the Smithsonian Institution planned a special exhibition, including A-bomb-related materials from Japan, but politicians and veterans' groups in America who were supporters of the atomic bombings protested and the exhibition was canceled. So a small exhibition was held with the support of American University in Washington, D.C. Despite its small scale, the exhibition made a significant impact on visitors.

I gave a speech at the opening ceremony, but to have people understand the reality of the bombing, it's best to show something real. We had things like a roof tile, where the surface was melted and bubbled by the bomb's heat rays, and a charred lunch box, but Nagasaki has more photos of people, which appeal more strongly to visitors' emotions. So I suggested to Iccho Ito [then Nagasaki Mayor] that we hold a "Hiroshima-Nagasaki Atomic Bomb Exhibition" and he agreed.

In 1998, an atomic bomb exhibition was held in India, a nation that has not joined the Nuclear Non-proliferation Treaty (NPT). Takashi Hiraoka visited the capital, New Delhi, in April. In the following month, India conducted nuclear tests for the first time in 24 years, and Pakistan followed.

I had heard that India was preparing the tests and I urged the Indian government to cancel them. But the Indian vice president told me that his nation would have to arm and protect itself with nuclear weapons because of the circumstances, with the U.S. Seventh Fleet deployed in the Indian Ocean, China and its nuclear arsenal located right behind it, and neighboring Pakistan developing its own nuclear weapons.

In his office was a photo of the late Mahatma Gandhi, so I said, "What would Gandhi, an advocate of nonviolence, think about these genocidal weapons?" Feeling pressured, he responded, "I suppose he would say not to use them, even if you have them." So I said, "Then you shouldn't have to possess them." But he replied, "The Japanese people are protected under the U.S. nuclear umbrella, so how can you tell other countries not to possess nuclear weapons?" It was like we were on two different wavelengths, and I had trouble expressing my objections clearly.

While the Japanese government advocates the nation's three non-nuclear principles (declared by then Prime Minister Eisaku Sato in 1967), it is not really doing much for the cause of nuclear abolition. It is true that Japan has submitted resolutions for nuclear disarmament to the United Nations, but I would say that the government has been making only halfhearted efforts.

Atomic bomb exhibitions are a powerful way of changing international opinion with regard to nuclear weapons. The city's budget, though, isn't large enough to hold these exhibitions with the frequency or scale desired. I asked the central government for support [in 1996], but the response has been minimal. If the Japanese government were to sponsor atomic bomb exhibitions, the United States would be offended. But if Japan is to lead the movement for a world free of nuclear weapons, this is a cross it must bear.