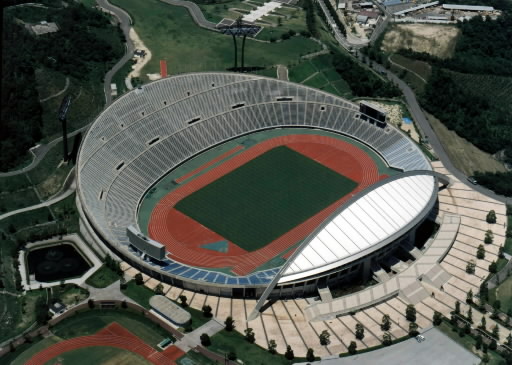 
Giving up a stadium roof for a new ballpark

Because of significant spending on the Hiroshima Asian Games, Takashi Hiraoka faced tough challenges in his second term in office.

I set up the Administrative and Financial Reform Promotion Headquarters in 1997 and tried to put the city's public finances on a healthy footing. I also proposed and promoted the Project of 200,000 Volunteers for Community Building. I wanted to make Hiroshima a vibrant city of energy and strength, like the vigor shown by those who raised the city from the ashes after the atomic bombing. Toward this end, I felt the volunteer activities and cooperation of our citizens would play an important role.

Since the city's finances were very tight, we had to wrack our brains to make the most of the limited budget. Cooperating with the prefectural government and the business community, we were successful in getting NHK [Japan Broadcating Corporation] to feature Mori Motonari [a prominent warlord who once lived in the area] in the popular long-running television drama series in 1997. We tried twice to invite more tourists through a theme song about Hiroshima. The singers did a good job, but the songs didn't sell well.

As for the improvement of urban infrastructure, we bought the old freight yard site for 11 billion yen through an advance acquisition from JNR Settlement Corporation. The land was for the new Hiroshima Municipal Stadium, which opened this past spring. The purchase of this land, in fact, was directly related to the city government's decision not to construct a roof over the stands of Hiroshima Big Arch, a decision that was bashed by the media.

In 1996, Hiroshima was considered one of the leading contenders within Japan to host the 2002 FIFA World Cup. But since the city government decided not to cover all the bleachers of Hiroshima Big Arch, a large stadium in town, Hiroshima was not selected.

To tell the truth, there was a blueprint for the roof, and construction costs were estimated at 14 billion yen. At first Japan tried to host the World Cup alone, but it was ultimately co-hosted with South Korea. Even if Hiroshima had been selected, only three games would have been held here. The roof was given up from the viewpoint of cost-effectiveness. With the same amount of money, we could improve the infrastructure of the eastern part of the city, which would promote a merger with the town of Kaita.

As the old ballpark was aging, I had the construction of a new municipal stadium in mind. If a new stadium was built on the same site, the games [of the Hiroshima Toyo Carp, a professional baseball team based in Hiroshima] would have to be held somewhere else during the construction. That wouldn't have been good for either the team or its fans. But if a new stadium could be built in the old freight yard site, it would stimulate the economy of the eastern part of the city, and the increase in land prices around the new stadium would benefit the municipal finances. I held many discussions with Kohei Matsuda [then owner of the Hiroshima Toyo Carp, who died in 2002]. I told him I would submit a plan to the city council for building a dome stadium, but this didn't work out as I had hoped.

In my second term, for the 50th anniversary of the atomic bombing, I launched the Hiroshima 2045: City of Peace & Creativity project [which employs renowned architects to build high-quality, well-designed structures]. If the project can be maintained to the 100th anniversary, I believe the city will have an attractive cityscape. But city development is not something a single mayor can complete. So the initiative of citizens and their volunteer efforts are of great importance.