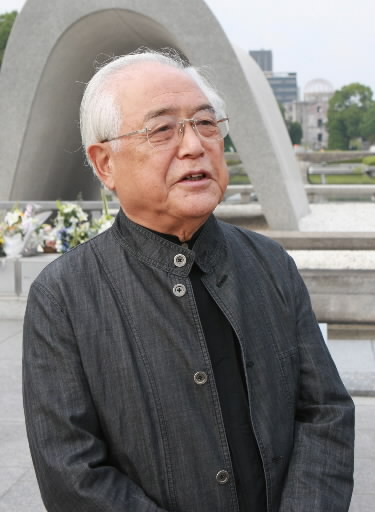 
Finding hope in Hiroshima, looking ahead to the future

After retiring due to a decline in physical strength in 1999, Takashi Hiraoka has remained involved in such activities as providing support for victims of exposure to radiation and giving lectures both in Japan and overseas.

Since I like yachting, I hoped to spend my retirement fishing and sailing. But while I was in office, I established "Hiroshima Future University" [in 1995], and preached the importance of volunteer activities. Some of its first students asked me to help them with some projects.

One is providing assistance to the radiation sufferers of Semipalatinsk in Kazakhstan. [The former Soviet Union conducted approximately 470 nuclear tests there until 1989.] The other is the construction of Hiroshima House in the Cambodian capital of Phnom Penh. Both of these projects grew out of the support that the community centers in the city lent to the countries which took part in the Hiroshima Asian Games.

When I went to Semipalatinsk as head of the first delegation [in 1999], I used some savings to donate a land cruiser since such a vehicle is helpful for delivering medical goods over the rough terrain. The Hiroshima University Research Institute for Radiation Biology and Medicine has been conducting research in radiation damage, and Sanyo Girls' Junior/Senior High School has been accepting students from Kazakhstan. Cooperation with these entities has helped strengthen our activities. Students who have studied in Hiroshima assist as interpreters.

We ourselves laid bricks and helped with the construction of Hiroshima House, and a four-story structure was completed three years ago. The first floor is leased to the International Social Service Japan, and the facility is beginning to be utilized as a headquarters that supports local non-governmental organizations.

I also serve as chairman of C-haus, an organization which promotes networking within the Chugoku Region. If you call for the elimination of nuclear weapons, but your own community is fragmented, the appeal will only be an abstraction and people will view it as something divorced from reality. A "nuclear-free world" does not necessarily mean a "peaceful world." There must also be a concrete idea about what sort of society should be built after nuclear weapons are abolished. Otherwise, your words are only slogans. When considering issues of human rights and the environment, thought should be given to people's everyday lives. Only in this way can "peace" really be understood.

The spirit of Hiroshima rose from the flaming hell of the atomic bombing. After more than 60 years, people can no longer feel what the suffering was really like. Based on the experience of the bombing, our thoughts on peace should be rooted in our daily lives. These thoughts can then spread elsewhere in Japan and to the world, eventually leading to a nuclear-free earth. It's no easy task. But this is my mission to pursue as long as I'm privileged to live.